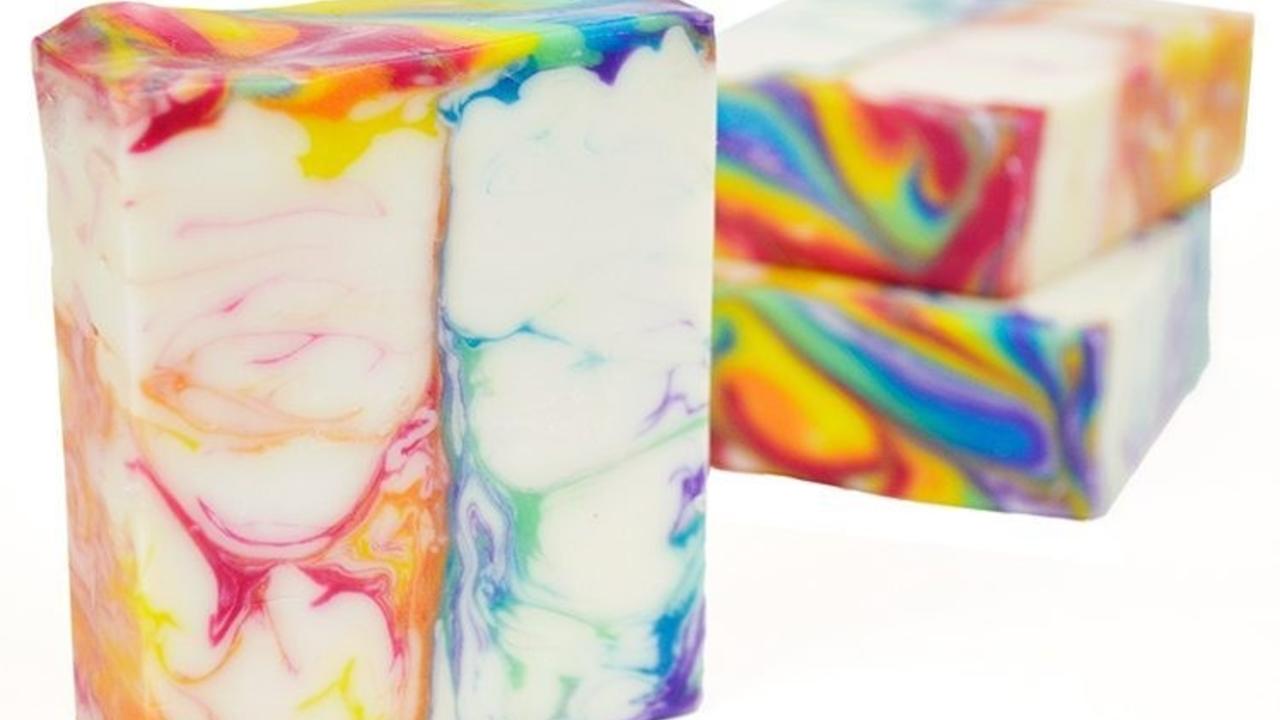 I recently chatted with another soapmaker about all the different types of swirls and their names, and we battled a bit about the difference between the elemental swirl and the in-the-pot-swirl.

Eventually, we agreed that an ITPS became an elemental swirl if it had more than one layer and maybe a pencil line. (Maybe?)

So, it's basically a modified ITPS, right?

Or was the elemental swirl named for the colors used in the original soap that popularized the technique?

So, whatever you want to call this swirl, I present to you yet another rainbow swirled soap.

Either way, I wish I recorded a video of making this soap as explaining the parts and pieces might get a little confusing. Crossing my fingers that everyone follows along!

This is a remix recipe of one of my favorite palm-free recipes, used in the Rainbow Ombre Soap Tutorial. If you don’t have babassu (it is pretty expensive), you can replace the babassu oil with mostly coconut oil and a little shea butter.

You can also use it in a 10″ Bramble Berry silicone mold, like most of my other tutorials, but you’ll get a little extra soap. Or simply re-size it using a lye calculator – whatever works for you.

I buy most of my soaping oils from Soaper’s Choice (Columbus Foods).

PREP WORK: Weigh out your soaping oils. I like to add my essential oils to my main soap pot so I can’t possibly forget them later. Make up your lye solution, too!

I keep my Titanium Dioxide premixed and diluted, so I can easily add it to my soap. If you don't, you'll want to prep your TD. In six separate measuring cups, I measured out the individual colors and a small amount of oils from the main batch of oils. 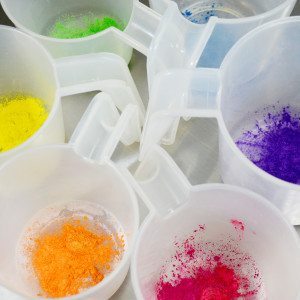 Prepare the rainbow of micas with 1 to 1.5 teaspoons of oil from the soaping pot for each 0.5 tsp of colorant. Use a frother to mix them up.

GET STARTED: Add your lye solution to your soaping oils.

Stick blend until barely emulsified, and then split the batch into two halves. Let's call them Half One and Half Two.

Split a quarter of Half One into the measuring cups containing the Pink, Orange, and Yellow dispersed micas. Thoroughly mix the raw soap into the pink, orange, and yellow containers.

Split a quarter of Half Two into the measuring cups containing the Green, Blue, and Purple dispersed micas. Thoroughly mix the raw soap into the green, blue, and purple containers.

Once you have split off the soap for the rainbow micas, add 1/2 teaspoon of Titanium Dioxide to Half One and Half Two. I used a stickblender (lightly!) to quickly mix in my Titanium Dioxide, which made the white soap a little thicker. This was what I was going for, so the weight of the white soap would create thinner veins of rainbow swirls. ;) 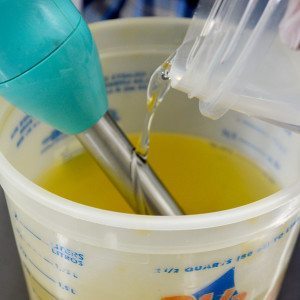 Add your lye solution to the oils and stickblend lightly to emulsification. 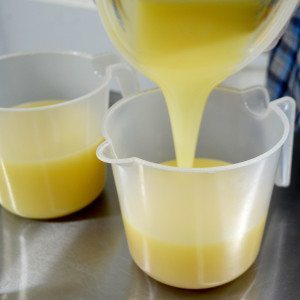 Split the uncolored batch of soap into two large measuring cups or bowls. 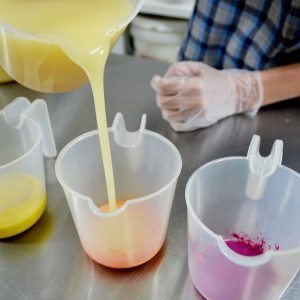 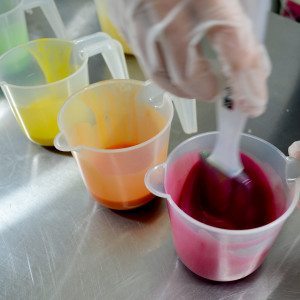 Thoroughly mix the soap into the dispersed mica colorants.

Next, we're going to use the rainbow of raw soap to add in-the-pot-swirls to the soap colored with Titanium Dioxide.

In Half One, add the Pink, Orange, and Yellow soap around the outside of the measuring cup, and a stacked funnel pour down the center. You can just pour it in there randomly, but I like to make sure I can see all the colors added to ensure I don't forget one! If you want to mimic the swirl I did on the top, reserve a tiny bit of the Pink, Orange, and Yellow soap (about a tablespoon of each.)

Repeat the process with Half Two, with the Green, Blue, and Purple soap. 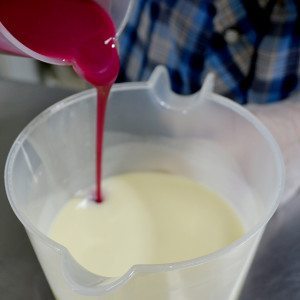 Add the Red, Orange, and Yellow back into the measuring cup containing the now white soap. 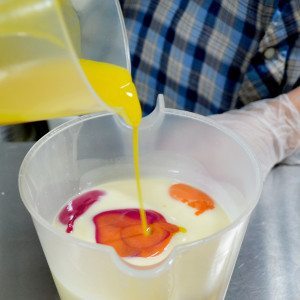 Pour each color around the outside of the measuring cup, and a majority of the rest of the Red, Orange, and Yellow soap in the center. (Save a tiny bit for the top!) 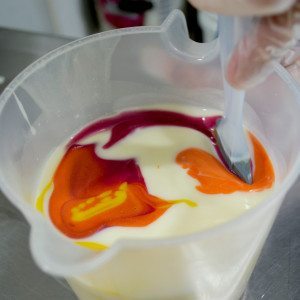 Use your spatula to lightly swirl the colors into the soap. 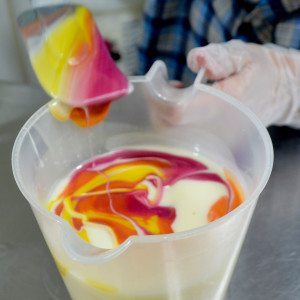 I usually just swirl around the cup once. You don't want to mix the colors in and muddy them. You can skip this step, too!

POUR IT: Now it's time for Half One and Half Two to meet once again!

I used a divider down the length of my mold in the center, which gives the two even sides you see in the finished rainbow double ITPS/elemental swirl soap and mimics a pencil line down the center as it drags color up through the center. You can skip the divider for a different take on this swirl!

Pour Half One and Half Two into the mold at the same time. I move my measuring cups down the length of the mold as I pour, if you pour into one place you will get a different effect.

After pouring both halves of soap into the mold, remove your divider. 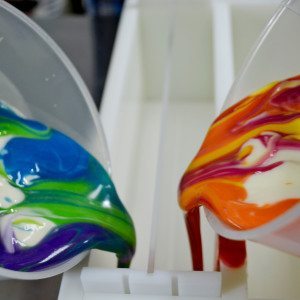 Pour both sides of the ITPS at the same time. I used a divider, but you don't have to - in fact, it can create a pretty cool effect to skip the divider! 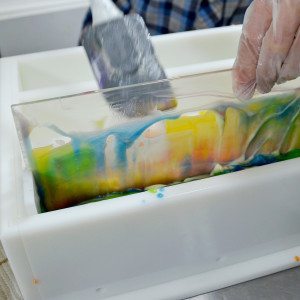 As you remove the divider (if you used one), scrape down the sides with your spatula. Waste not!

FINISH IT UP: Finish the top as you please! For this particular rainbow double ITPS/elemental swirl soap batch, I used the remainder of each color and poured it down the length of the mold. After lining it all up, I swirled it with a chopstick. 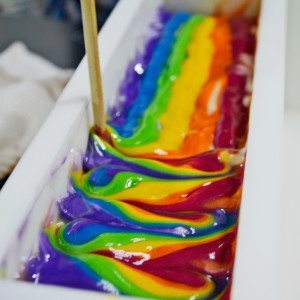 Pour the remainder of the rainbow colors in straight lines down the top of the soap, and swirl it up!

Spritz the top with rubbing alcohol when it loses the sheen of wet soap, and cover with plastic wrap to help keep the ash monsters away. 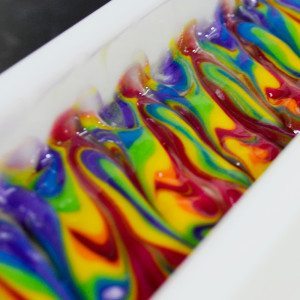 Make sure to spritz the top of the soap with alcohol after it loses it's sheen, and keep it covered to keep ash at bay!

Remove the soap from the mold, slice it up, and give it a good cure. Enjoy! 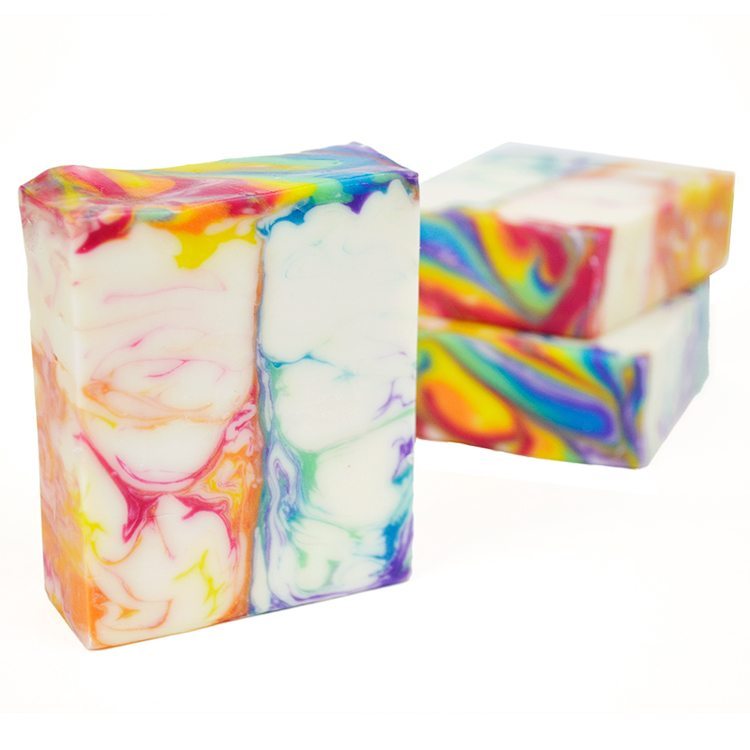 Cut & Cured Rainbow (Whatever It Is) Swirl Soap!

This rainbow dual elemental swirl or double in-the-pot-swirl soap recipe featured in this tutorial is a palm-free and vegan friendly formula. It uses a 7% superfat and a 33% lye solution strength. Feel free to adjust as necessary!