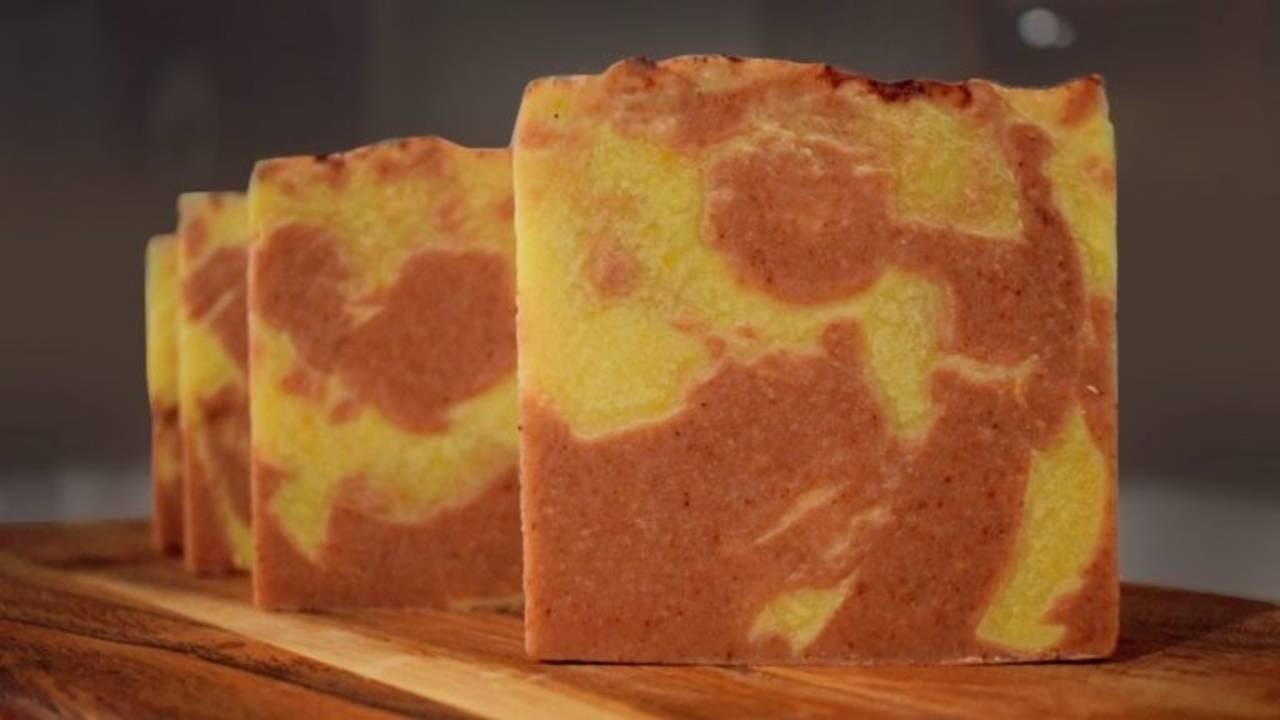 This tutorial comes to you courtesy of Leanna Blacher.

Fall is here!! And with it comes all of the lovely foods and drinks and colors and scents. Why not incorporate fall into a soap? I couldn't decide what I liked more - apple cider or pumpkin, so I thought a fall medley soap that uses both apples and pumpkins would be perfect!

This soap involves making your own apple cider and your own roasted pumpkin puree, but you can certainly purchase apple cider (low or no sugar variety) and canned pumpkin puree to save time! If you want to do that, skip down below the tutorials for preparing your ingredients to dive right into the fall medley soap tutorial!

Before we can use fresh ingredients in our cold process soap, we need to prepare them! Here's what you'll need to make our two fresh homemade ingredients: apple cider and roasted pumpkin puree.

PREP THE APPLES AND ORANGE: Quarter the apples and the orange. No need to remove peel or seeds!

Place the cut apples and orange into your crockpot. Then, add the spices and cover with water. It is okay if the water goes almost to the top of your crockpot! Cover your crockpot, and set on low for six to eight hours. 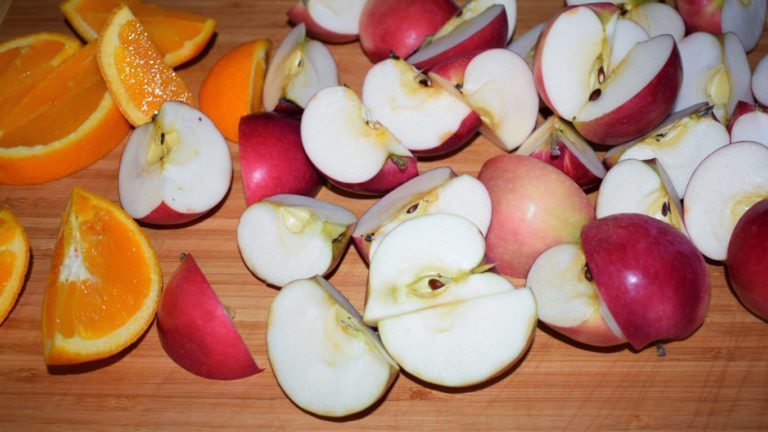 Chop apples and orange into quarters. Don't worry about the peels and seeds because we will strain the apple cider later. 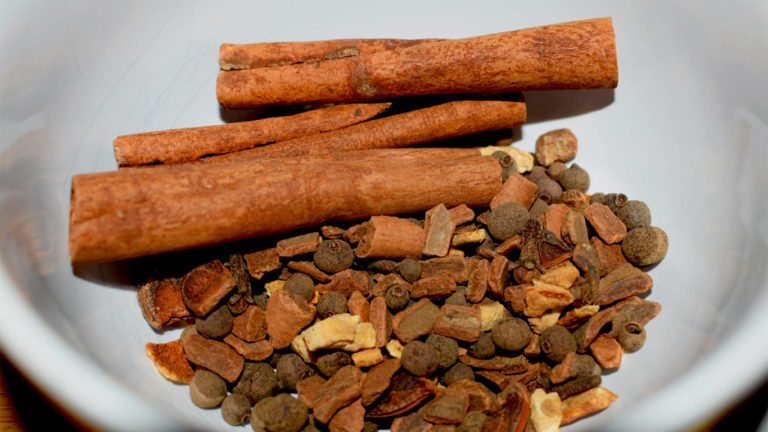 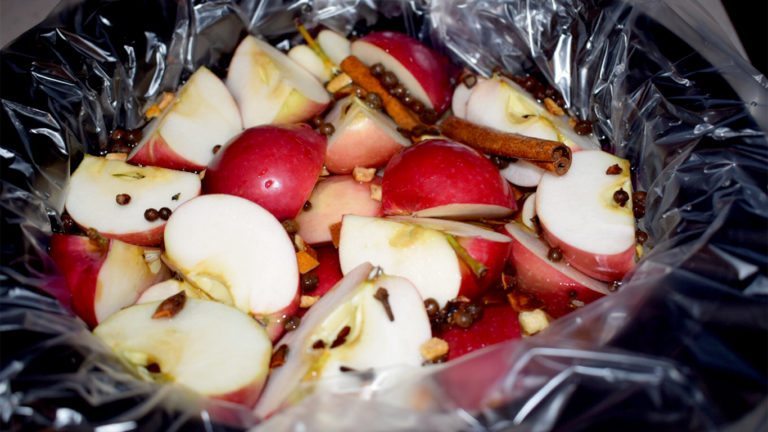 Place the apples, orange, spices and water in the bowl of your crockpot. Cover and cook on low for 6-8 hours.

MASH AND STRAIN: After the apple cider has cooked for six to eight hours on low, give the ingredients a mash with a spoon or a potato masher. Then, strain through a fine mesh strainer with cheesecloth or use nut milk bag.

Allow the apple cider to cool to room temperature, and then refrigerate or freeze. My personal rule is that I freeze any liquids that are not pure water, so I filled and froze one ice cube tray with the apple cider. 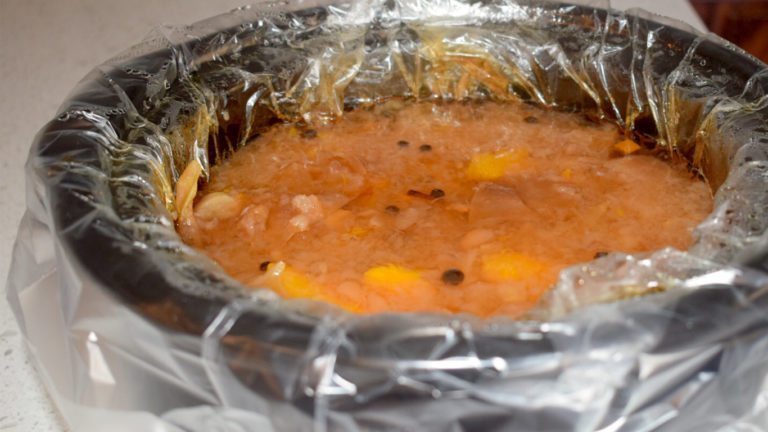 After the apple cider has cooked, mash the ingredients a bit before straining through a fine mesh strainer and/or nut milk bag. 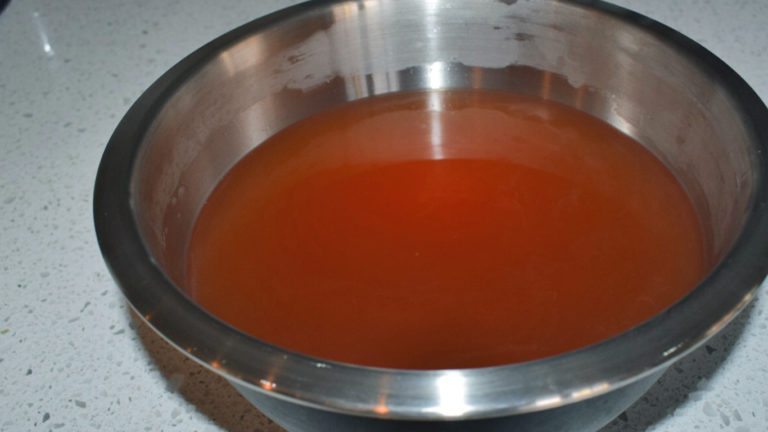 Now that you've created your own apple cider, we'll be using it as a water replacement in the apple cider soap portion of the fall medley soap.

ROAST: Remove the top from your pumpkin and scoop out all of the seeds. Roughly chop the pumpkin and place it on a baking tray lined with foil or parchment paper. Place in a preheated 375° F oven for 45 minutes, or until the pumpkin is tender. 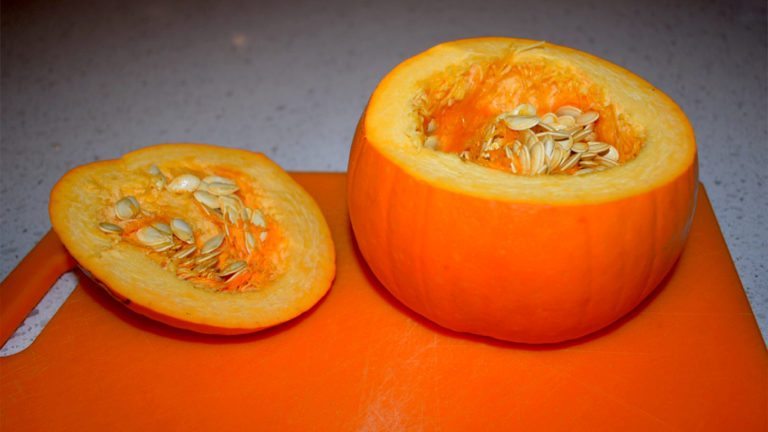 This is a small sized pumpkin. Stores sometimes call them "pumpkin pie" pumpkins because they are the perfect size to use for a pie or two. 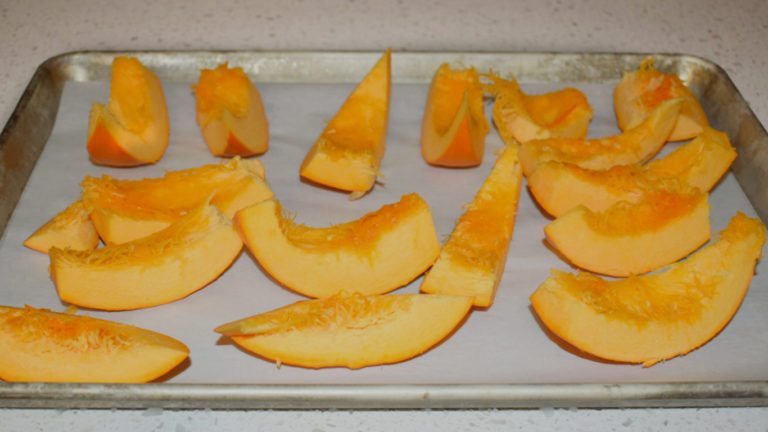 The pumpkin has been sliced into rough pieces and is ready for the oven. Bake at 375° F for 45 minutes or until tender.

PUREE: Remove the skin from the pumpkin pieces and place into your blender or food processor with 1 cup of water (you may need more water if the puree is too thick). Blend until the puree becomes silky. 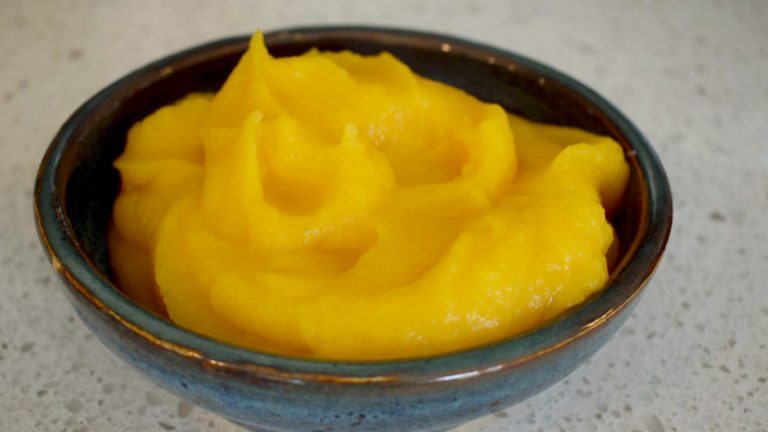 This puree is beautiful and silky and will be great as an additive in the pumpkin soap.

Now that you've created your own roasted pumpkin puree, we'll be using it as an additive in the pumpkin soap portion of the fall medley soap.

This apple cider and pumpkin soap recipe is sized for a 11.25" Essential Depot silicone mold. You can resize it using a lye calculator for whichever mold works for you.

(If you aren’t sure how much soap your mold holds, you can find out with this guide to resizing your soap recipes to fit your mold.)

** I know that this is a steep water discount. I like to do this so that my soaps harden quickly and cure quickly. Please feel free to adjust this recipe for more water: a 33% solution would use 13.2 ounces of water total.

I buy most of my soaping oils from Soaper's Choice and Wholesale Supplies Plus.

Looking for essential oil blends to use instead? Check out the Essential Oil Blending Calculator! 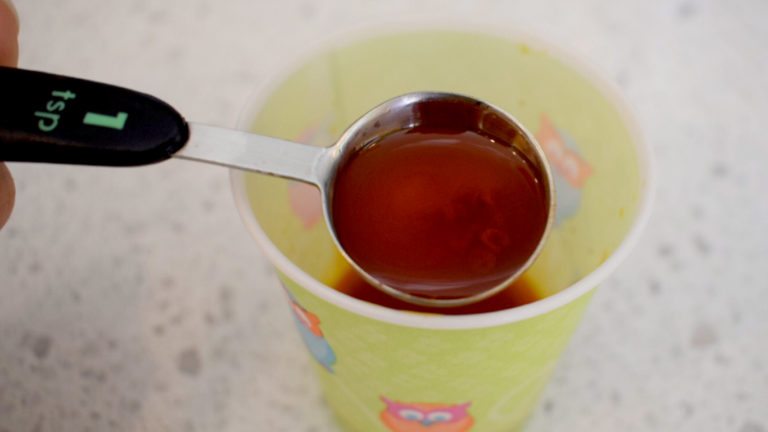 Annatto seed and oil mixture. Strain it before using to color the pumpkin half of the soap.

Divide the entire recipe in half, and prepare your oils, lye solution, and additives for each half of the recipe.

APPLE CIDER SOAP: Let's start with the apple cider soap half! Slowly pour your lye over the frozen apple cider ice cubes (or apple cider, if you didn't freeze it!) and stir.

Once at a light trace, pour your apple cider soap into the mold! (My soap in this photo is more of a medium trace, but you'll have an easier time swirling if you pour at a lighter trace!) 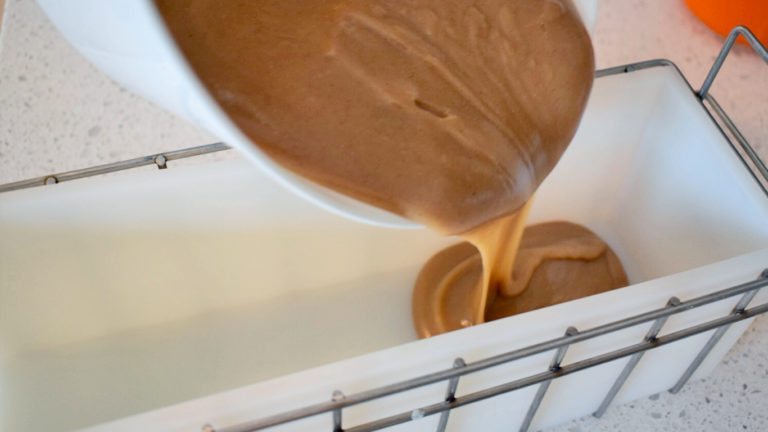 Carefully pour the apple cider soap into the mold.

PUMPKIN SOAP: Now, we'll make the pumpkin soap half for the top layer. I used filtered rainwater in my lye solution, but you can also use distilled water or any other liquid.

At medium trace, carefully pour the pale orange soap on top of the red soap by pouring it over a spatula and letting it gently fall onto the red soap.

If your apple cider soap is set up, you may not need to use a spatula to flood fill the pumpkin soap layer. I intended to do a simple spoon swirl, but the apple cider layer was beginning to set a bit too much, so I just did a rough swirl to mix the layers somewhat. 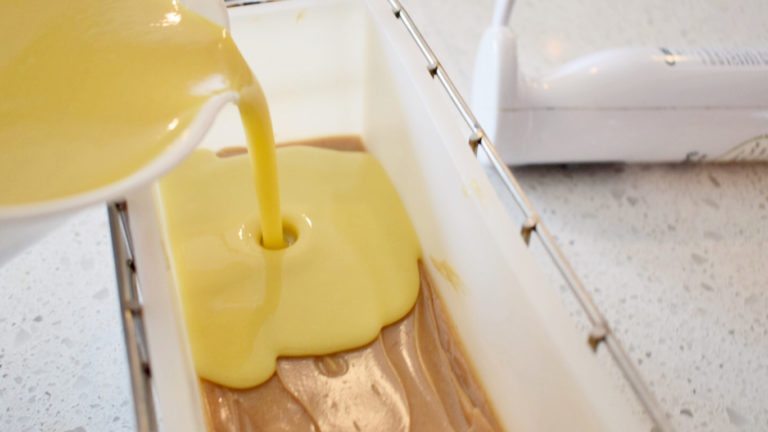 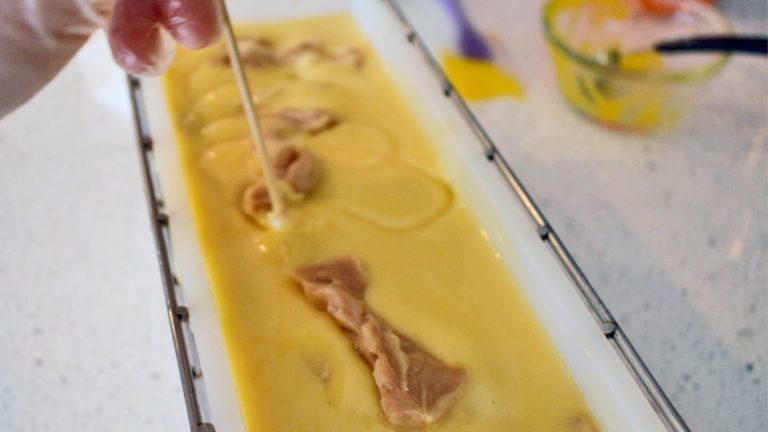 DRESS IT UP: I used a bit of the madder root powder to decorate the top. I sprinkled a little on top and swirled it with a small skewer.

Cover your mold with plastic wrap and wrap it in a blanket overnight to fully gel. Cut, cure, and enjoy! 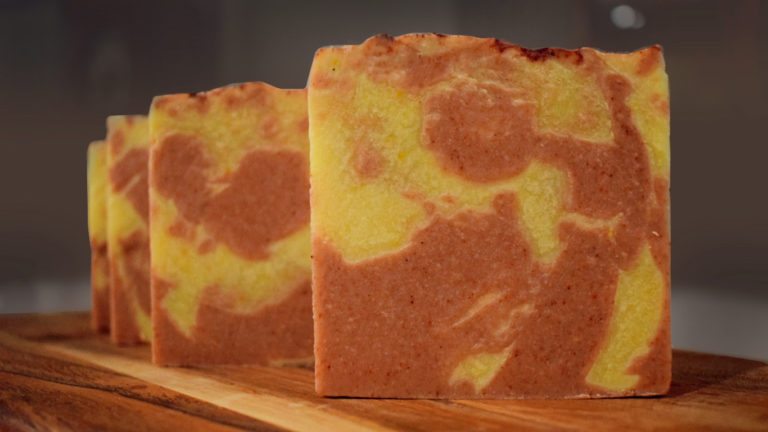 The apple cider pumpkin soap recipe featured in this tutorial is palm free and vegan-friendly. It uses a 10% superfat and a 40% lye solution. Feel free to adjust as necessary!

I really enjoy using food in soap, especially when it's seasonal! Let me know in the comments below if there is a food item or liquid you'd like to see in my next Using Food in Soap tutorial!