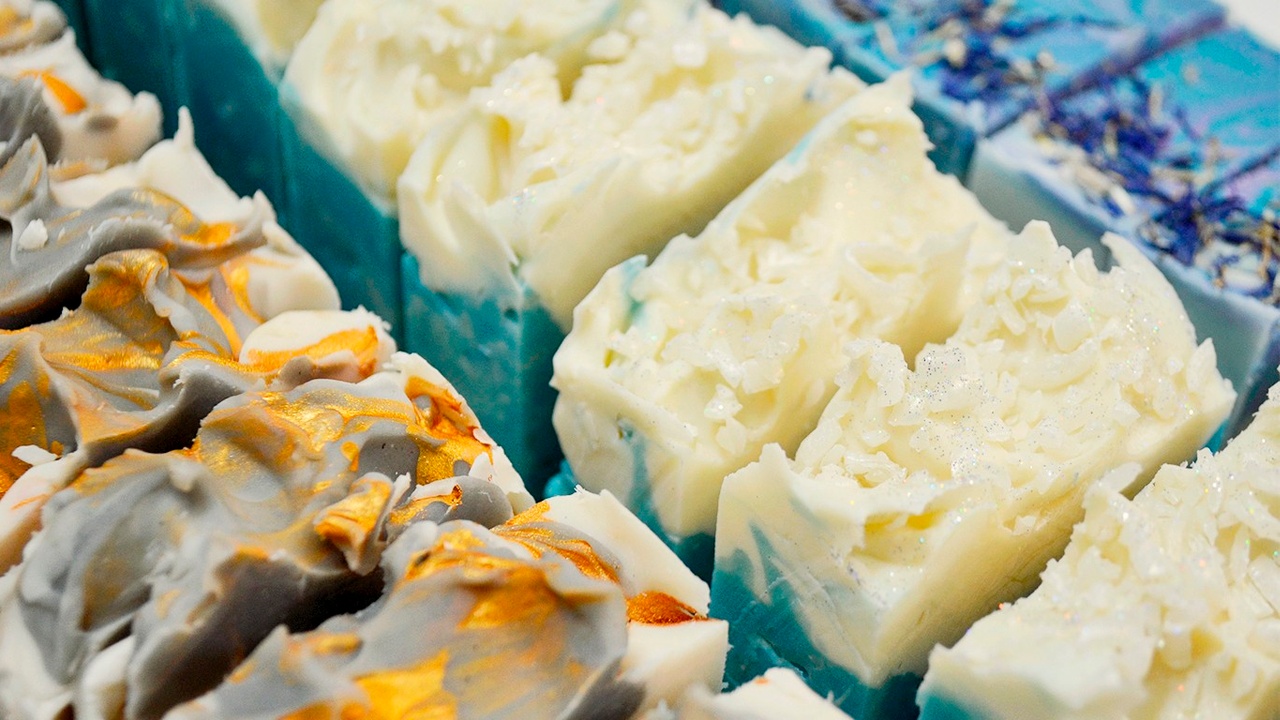 A lot of soapmakers start formulating on their own based on SoapCalc's soap quality numbers, even though they are surrounded by mystery. Most soapmakers aren't exactly sure where the numbers come from or what exactly the numbers mean. So much so that students in my Formulating Soap Recipes class were blown away to learn what contributes to the numbers listed in SoapCalc. 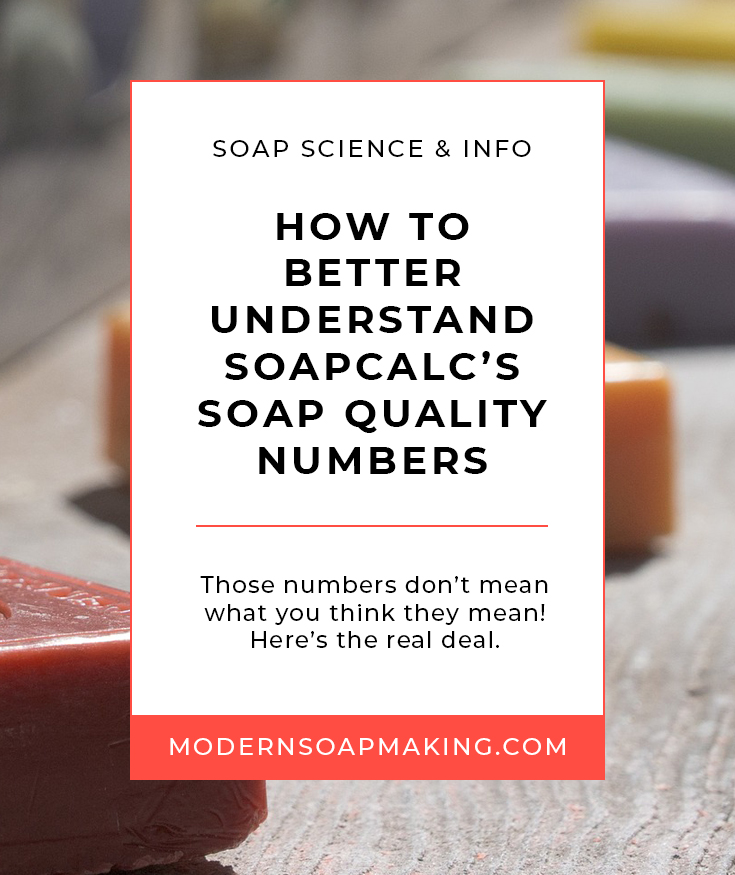 This refers to the hardness of the soap bar.  Higher is harder.  A range of 29 to 54 is satisfactory for this soap quality. (SoapCalc's Definition for Hardness)

The hardness rating is calculated by adding all of the formula's saturated fatty acids (lauric, myristic, palmitic, and stearic) together to create the rating you see. For example, in the case of castile soap (which is 100% olive oil) the hardness number is 17: 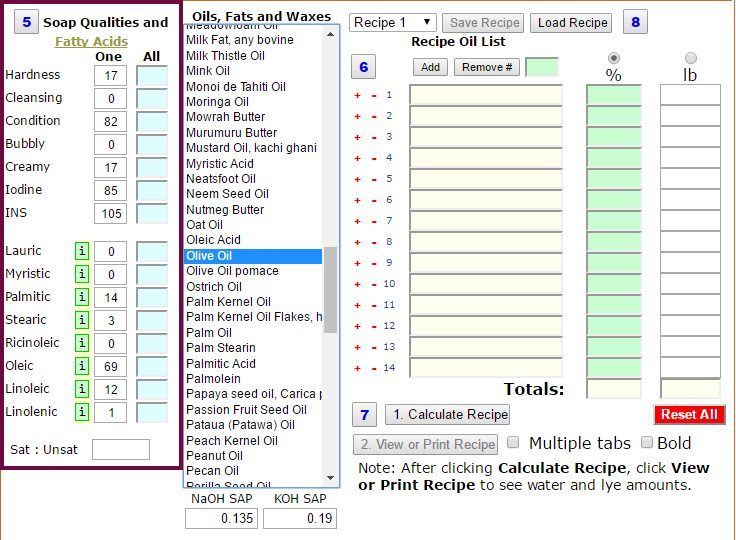 If you've ever made castile soap, you know that a fully cured bar of castile soap is actually very hard physically. Saturated fatty acids do contribute physical hardness to a soap. But, almost any soap can become extremely physically hard after a sufficient curing period and reduction of the water amount in the soap formula.

I prefer to look at SoapCalc's soap quality number for hardness as an indicator of how durable or long lasting the soap will be after it's cured. A soap formula with a lot of saturated fatty acids will last longer (under normal conditions) than a soap with lower saturated fatty acids. Of course, the type of water the soap is used in and how it's used or stored will affect the soap's durability.

This refers to the soap's ability to grab onto oils. [...] Some soap molecules can have a very hungry oil grabbing end.  Soap made with too much Lauric and/or Myristic Acid can irritate the skin by washing away not only the top dirty layer of oils, but also the protective layer of surface oils on the skin.  Generally speaking, keeping the total of coconut and palm kernel in your recipe to no more than 30-35% is considered the norm.  However, when using large or very large percentages of coconut and palm kernel the strong cleansing can be compensated for by superfatting with an oil or butter that has a high conditioning value.  A typical range for Cleansing would be 12 to 22. (SoapCalc's Definition for Cleansing)

SoapCalc's description for the cleansing number is pretty accurate. The description should tip you off that the rating is calculated by adding together the formula's lauric and myristic percentages together.

Again, in the case of castile soap, you'll notice that the cleansing rating is 0 because olive oil doesn't contain lauric or myristic acid. Does this mean castile soap doesn't clean? Goodness no! It simply means that castile soap is less stripping than another soap formula. Castile soap still cleans by binding to dirt and oils and rinsing away.

Another important factor to consider (which is mentioned in SoapCalc's definition) is that the cleansing rating does not take into account your superfat. The higher your superfat, the more free fatty acids there will be in the soap. The best way I can explain this in non-chemistry terms is to think of your superfat as a buffer, reducing the cleansing ability of the soap.

For instance, in 100% coconut oil soap, SoapCalc gives a cleansing rating of 67, which is far above the range of recommended cleansing. However, the recipe uses a 20% superfat to counteract the high lauric and myristic content of coconut oil. Coconut oil has an extremely long shelf life, so the high superfat isn't going to cause issues with rancidity.

For most formulas, a superfat typically lies in the range of 3% to 7%, but it's important to keep this in mind in relation to the rating of cleansing in a formula. You want to consider the stability of your oils when changing up your superfat. If your formula is high in unsaturated fatty acids, you likely don't want to go over 7% superfat.

Conditioning refers to the soap’s emollient content.  A soap’s emollients are left on the skin. They help the skin  retain moisture.  They sooth the skin and keep it soft.  A range of 44 to 69 is satisfactory for this soap quality. (SoapCalc's Definition for Conditioning) 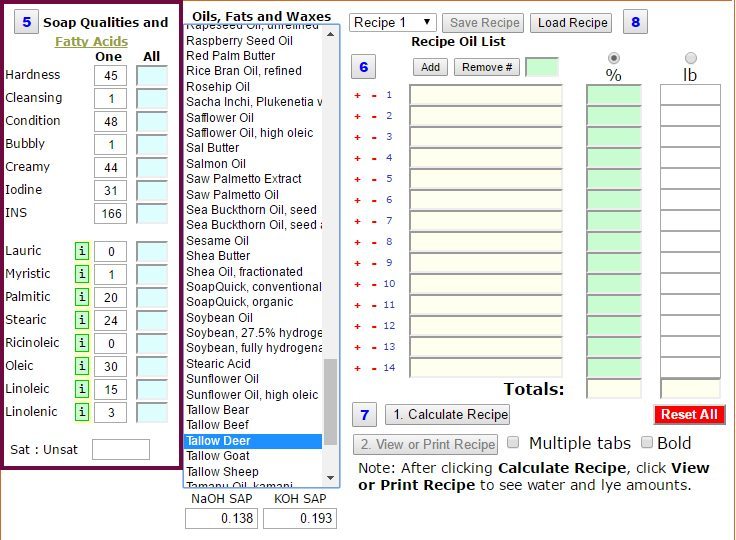 Again, it's important to keep in mind that because the ratings are determined by adding together fatty acids present. SoapCalc isn't including your superfat in the numbers. No matter the soap formula, a soap with a 0% superfat will feel less conditioning than a soap formula with 10% superfat.

This refers to the soap’s ability to lather up and get bubbly.  A typical range of values would be 14 to 46. The higher Bubbly numbers will tend to produce a foamy, fluffy lather rather than a creamy lather with little or no bubbles. (SoapCalc's Definition for Bubbly Lather)

And this is where SoapCalc's Soap Quality numbers really starts to get pretty squirrelly. The rating for bubbly lather is calculated by adding together the lauric, myristic, and ricinoleic fatty acids. While lauric and myristic acid are largely responsible for big fluffy lather, ricinoleic acid does not actually contribute to the lather in the same way. 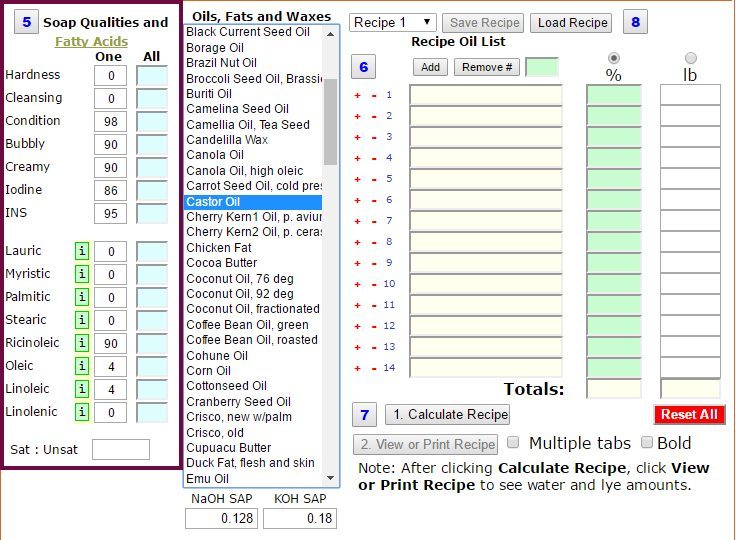 SoapCalc's Soap Quality numbers for Castor Oil show how the lather ratings can be deceptive.

Ricinoleic acid is better viewed as a lather stabilizer, where it helps the lather longevity provided by the saturated fatty acids. Ricinoleic acid in soap does not have a lot of lather on its own. I like to think of it as a great supporting actor rather than the star of the show. If a formula contains very little lauric and myristic acid but a lot of ricinoleic acid, the bubbly rating will be really high. The formula won't have the bubbly lather you expect from the rating given because the lauric and myristic are low on their own.

Personally, I simply subtract the ricinoleic content from the bubbly rating to reach a better idea of the size of the lather's bubbles (big fluffy empty bubbles). In doing so, I'm basically adding the lauric and myristic acid content together, which is great because that's the two fatty acids that contribute to that soap quality.

This value indicates the stability and creaminess of the lather.  Usually, increasing Bubbly will decrease Creamy and vice versa.  A range of 16 to 48 is common here. The higher Creamy numbers will tend to produce a creamy lather with lesser amounts of bubbles or foam. Soap made with oils that do not contain Lauric, Myristic or Ricinoleic acids will produce a soap with just creamy lather. An example would be 100% olive oil soap. (SoapCalc's Definition for Creamy Lather)

Just like with SoapCalc's number for bubbly lather, the creamy lather number is deceptive for the same reason. The creamy lather rating is calculated by adding together the palmitic, stearic, and ricinoleic acid content of the formula.

Like with the bubbly lather number, I simply subtract the ricinoleic content from the creamy rating to reach a better idea of the size of the lather's bubbles (small tight creamy bubbles). In doing so, I'm basically adding the palmitic and stearic acid content together, the two fatty acids that contribute to creamy lather.

Putting It All Together

Hopefully, you now have a better understanding of what SoapCalc's Soap Quality numbers actually mean! SoapCalc recommends a range of ratings for each quality for a general purpose soap. These values are summed up below in this table:

These ranges are great starting points for a soapmaker learning how to formulate. By taking it a step further and understanding where the ranges are coming from and what contributes to them, you'll have a better understanding of your formula. 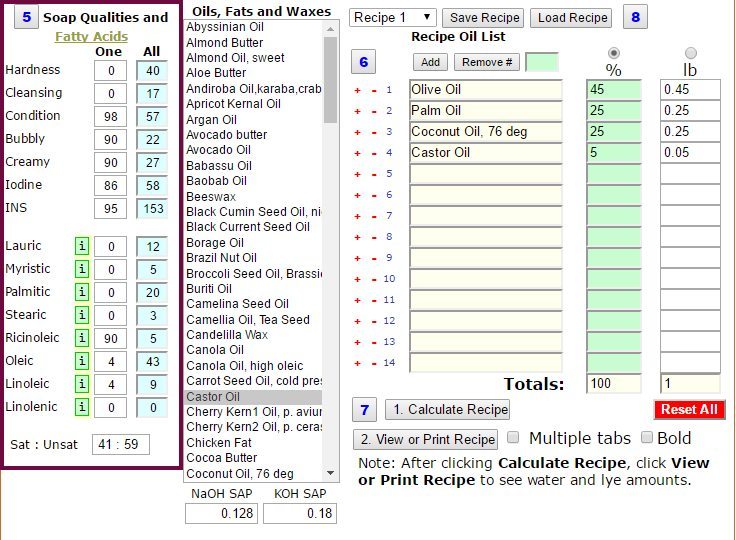 The above formula is a tweaked version of the holy trinity formula that I like to use when teaching new soapmakers. As you can see, it fits into SoapCalc's recommended ranges for soap qualities. I wouldn't argue that it's the best soap recipe ever, but what each soapmaker likes and doesn't like varies!

Personally, I prefer instead to formulate based on the fatty acid profile of the formula itself. For a general purpose body soap, I tend to follow these fatty acid ranges:

Most formulas that fall in these guidelines for fatty acids will also check out with SoapCalc's Soap Quality numbers and their recommended ranges. The above beginner soap formula comes pretty close to most of my fatty acid ranges as well.

Now, it's important to note that what the soap will be used for will largely influence the fatty acid ranges you aim for.

Shampoo bars might have higher ricinoleic acid content, so the SoapCalc numbers for lather will be hugely inflated. For shaving soaps that contain higher palmitic and stearic acid, the hardness and creamy numbers will look out of this world.

Keep in mind that variables outside of your fatty acids affect how your soap will perform, including the type of water it's used in, how much of a superfat or water discount you use, how the soap is stored, how long the soap is cured, and so much more. SoapCalc's Soap Quality numbers (and my own fatty acid ranges) don't account for all those extra variables! You, as a formulator, should understand and account for all those extra factors when formulating.

(Want to up your game when it comes to formulating? Snag our Formulating Soap Recipes class and create your perfect soap formula.)

SoapCalc's Soap Quality numbers are great guidelines for a beginner soapmaker, and they will serve you well when formulating. But it's even better to understand how they are calculated and what to consider when using them as a formulating tool!