How to Replace an Oil in a Soap Recipe Accurately 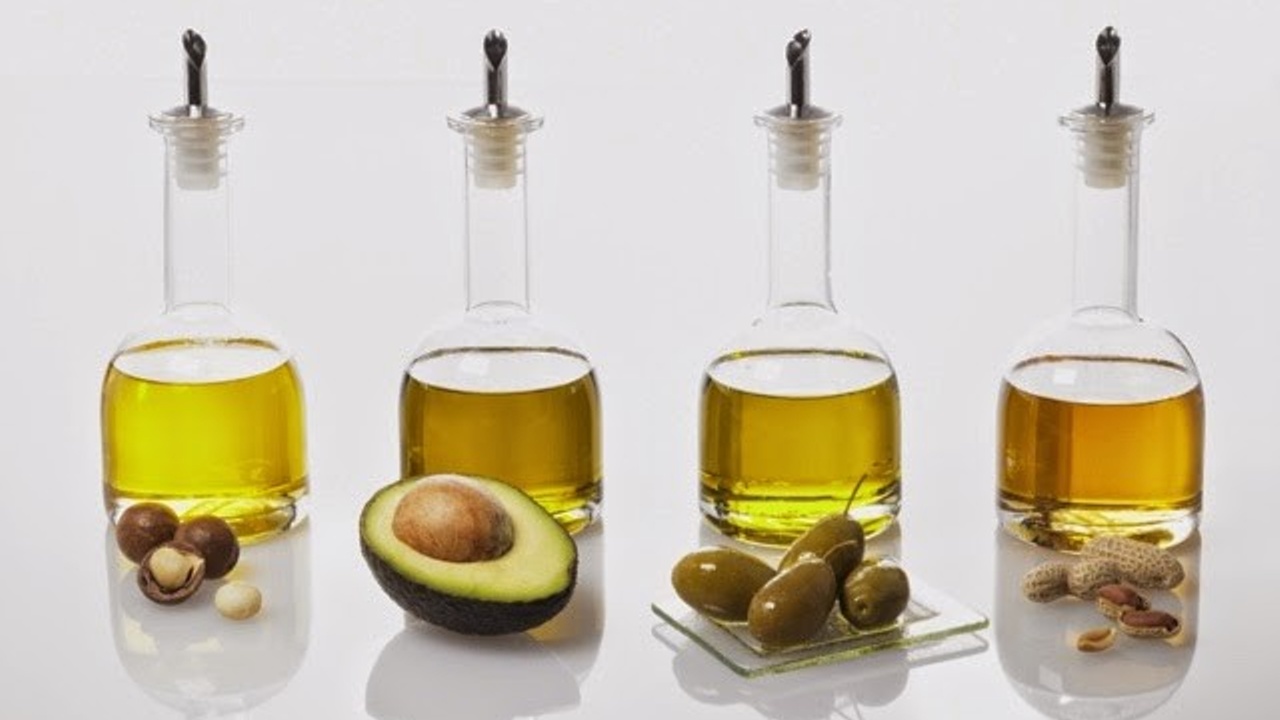 One of the most common questions I get here on Modern Soapmaking is how to replace an oil in a soap recipe. I know and understand that not everyone uses or stocks the same oils in their soapmaking studio, so I figured it was high time I wrote about it! 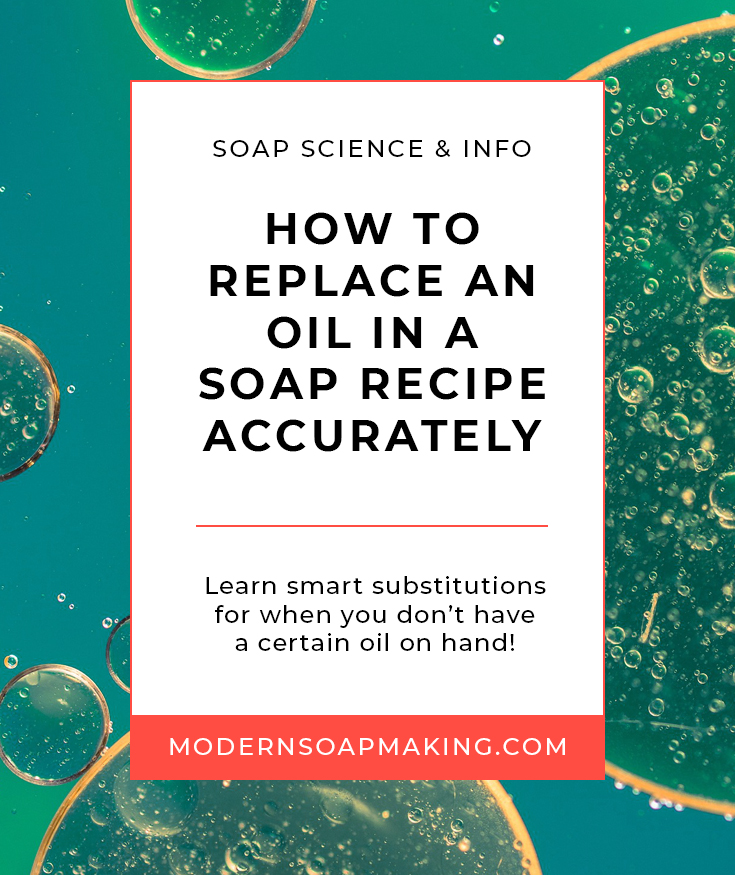 If you have made the soap recipe before, you can make a more educated decision about what you are changing and why. If you want to increase the lather or decrease how much a recipe strips the skin, you can make specific changes to the oil choices based on well known guidelines. (Not sure about those guidelines? This article about how to change a recipe is a great starting point.)

However, most requests about replacing oils in soap recipes are from soapmakers who don't know why specific oils are in the recipe or what they wouldn't like about it. These requests are usually from a soapmaker who doesn't have a particular oil on hand, so let's start there!

Step One: Evaluate the Oil You Want to Replace in the Soap Recipe

The first step to substituting an oil in a recipe is understanding it's role in the recipe itself. Since you haven't made the recipe in it's original state, this can be more difficult, but it's not impossible!

You want to understand the purpose of the oil in the soap recipe before you substitute it so that the recipe changes as little as possible from the original recipe. To do this, you need to look at two factors: the fatty acid profile of the oil itself and the qualities the oil brings to the final product.

In this article, I talk about the main fatty acids found in soaping oils and what they contribute to the saponified oil in a soap. Every oil in soapmaking has a fatty acid profile that dictates what properties the oil brings to the final recipe formulation.

If an oil is high in lauric acid and you replace that oil in your soap recipe with an oil high in oleic acid instead, you will see a drastic change in the recipe. The hardness, cleansing, and lather will decrease, and the resulting soap would be softer and may even be not cleansing enough. 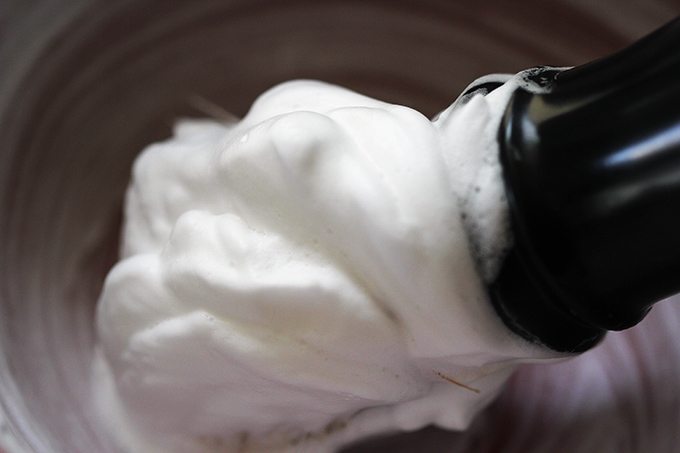 Veronica's shaving soap recipe is one of the top recipes where soapmakers ask how to replace an oil!

The soy wax used in the recipe is fully hydrogenated soybean oil (also known as soy wax) and it's fatty acid profile is as follows:

There is 50% soy wax in the recipe's oils, giving the final recipe the following fatty acid profile:

Remember, stearic acid is a saturated fatty acid that contributes hardness and creamy stable lather in soapmaking, similar to palmitic acid, except that it has a longer carbon chain. A recipe with 48% stearic acid is going to have extremely creamy stable lather, and that's why it's present in such a high percentage in our shaving soap recipes. If the fatty acid profile isn't taken into consideration when replacing the soy wax, the resulting recipe could be vastly different, and even lack the exact properties it was formulated to have.

Before you replace an oil in a soap recipe, it's hugely important to understand the specific role the oil has in the overall formula by taking a peek at it's fatty acid profile.

You can easily do this in Soapmaker 3 by creating a recipe with only that oil and looking at the fatty acid profile for the formula. Or in SoapCalc, select the oil in the lye calculator to see the updated fatty acid profile to the left: 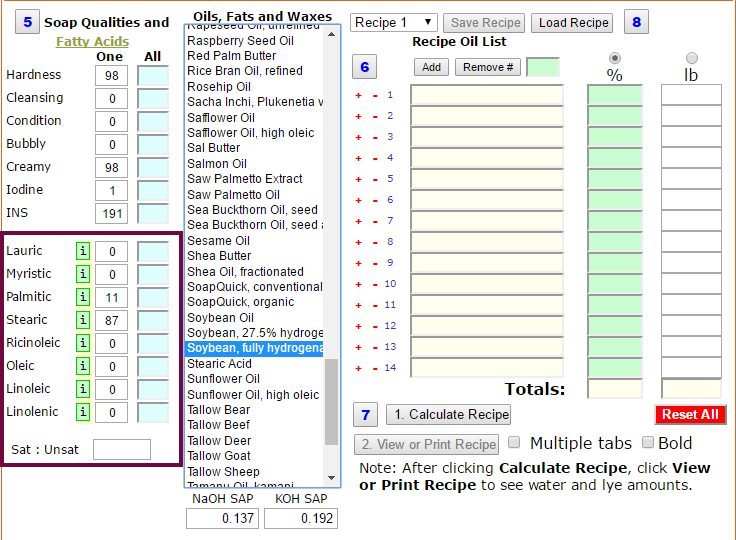 The fatty acid profile of Hydrogenated Soybean Oil on SoapCalc

After you look at the fatty acid profile for the specific oil you want to substitute, jot it down so you can refer back to it.

Most soapmaking oils are chosen in a soap formula for their fatty acid profile, but also for their qualities.

An oil might be in a formula because it contains a lot of squalene, tocopherols, or other unsaponifiables. If you replace an oil in a soap recipe that does not contain the same unsaponifiables, it may subtly change the recipe. The jury is out on whether or not unsaponifiables make a huge difference in soap, because soap is a wash-off product. However, if you believe the oils you choose in a recipe are important because of the nutrients, it would make sense to consider these factors when choosing a substitute oil for your soap formula.

To find out what unsaponifiable content is available in an oil, a good ol' Google search will help you figure it out.

Some soapmakers also choose oils based on what they are "good for." For instance, Broccoli Seed Oil is gaining traction as being a great oil for shampoos and conditioners. Or Evening Primrose Oil is touted as being great for mature skin. I don't personally think such choices matter in soapmaking, but if you do, you'll want to consider the role of each oil in the formula and find substitutions accordingly.

Step 2: Find a Similar Oil to Substitute in the Soap Recipe

When you replace an oil in a soap recipe, you want to choose an oil that is as similar as the original oil as possible. The priority should be on the fatty acid profile of the oil itself, and then on the qualities that the oil brings to the formula.

Based on Fatty Acids

You'll want to try to replace an oil in a soap recipe with another oil that has a similar fatty acid profile. We'll continue with our example of Veronica's shaving soap above, and try to replace the soy wax in the recipe! As a reminder, here's the fatty acids in soy wax:

So, you would want an oil that has a lot of stearic acid and a little bit of palmitic acid. SoapCalc has a handy sorting tool that allows you to sort the oils listed in their lye calculator by the fatty acid they contain. I like to start by finding an oil that has a similar amount of the highest fatty acid contained in the oil. For soy wax, that would be stearic. Sorting by the stearic content gives us this list: 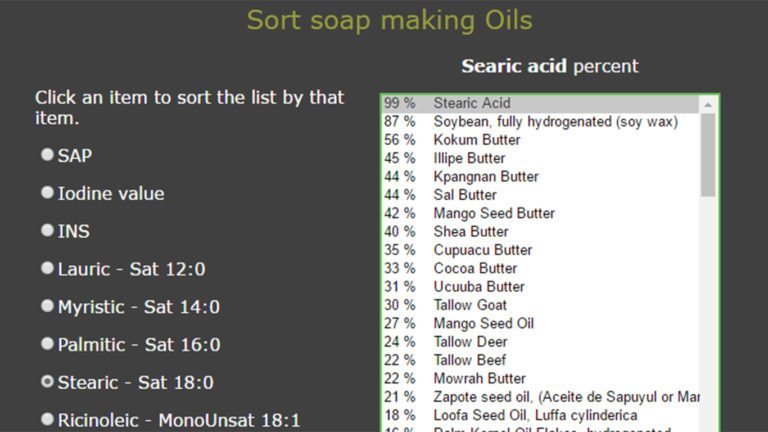 Choose an oil to replace in a soap recipe by finding an oil with a similar fatty acid profile using SoapCalc's sorting tool.

By doing this, we see our top three options are:

After creating a short list of options, you can check the oil's individual fatty acid profile to see how it matches up with the original oil. (Using SoapCalc, you can highlight the oil on the lye calculator and it will show the fatty acid profile, as shown previously!)

If you choose to use stearic acid as a replacement for soy wax, you may want to keep in mind that it contains more stearic acid. You could use it as a straight substitute, but the final fatty acid profile would be slightly different (more stearic acid!) 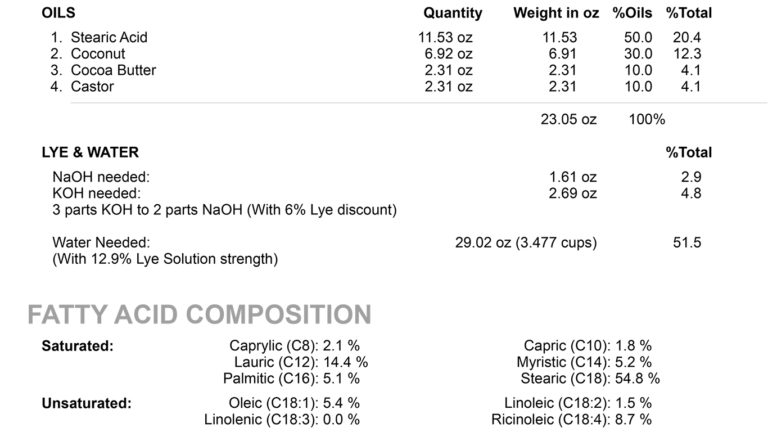 When you replace the soy wax with stearic acid in Veronica's shaving soap recipe, here's what you end up with!

However, if you wanted to use Kokum Butter instead, it has a lot less stearic acid content than the original oil (soy wax) and contains a fair amount of oleic acid. Here's what the shaving soap recipe would look like with a direct substitute of kokum butter instead of soy wax: 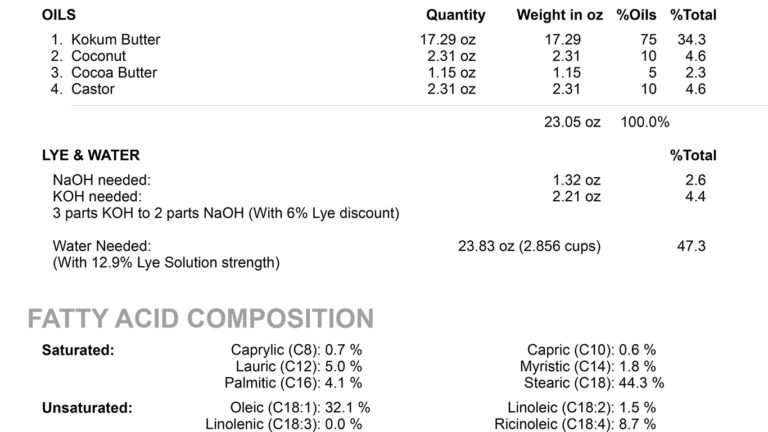 When you replace the soy wax with kokum butter in Veronica's shaving soap recipe, here's what you end up with!

In order to balance it out, you would need to increase the stearic acid content and decrease the oleic acid amount. Bumping up the kokum butter will help you get more stearic acid, but then you need to reduce other oils: 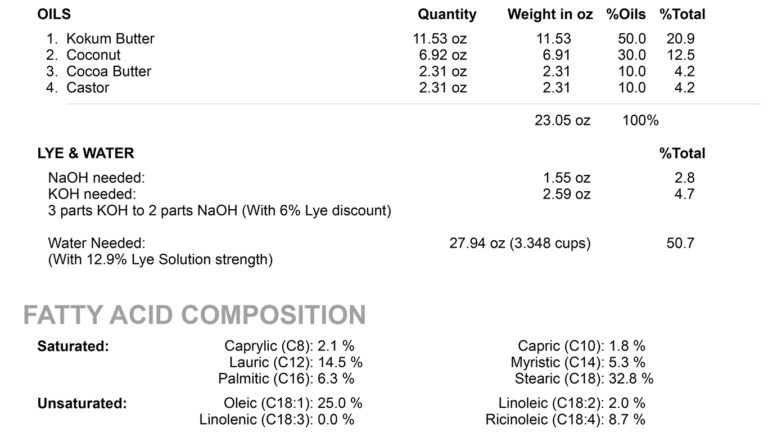 Attempting to tweak the recipe to replace an oil in the original soap recipe.

Even making those adjustments, you can obtain a larger percentage of stearic acid (but still not as much as the original recipe), plus there is more oleic acid and less lauric acid now. Unfortunately, because of the huge difference between the fatty acid profiles of kokum butter and soy wax, you won't be able to get a perfect substitution without changing the other oils in the soap formula, too!

Sometimes, you might need to use multiple oils to create the proper replacement fatty acid profile. For instance, if you wanted to replace olive oil in a formula, here are some options that will you get you extremely close to the fatty acid profile of olive oil:

If you don't mind if the oil replacement isn't super close to the original, you can use an approximate substitution instead. Here are some common substitutions:

So, you could replace olive oil with almond oil, or avocado oil with high oleic sunflower oil (or any other oil in that list) and see a similar result. However, it won't be as accurate as a more precise substitution as discussed above!

You may also choose to partially replace an oil to retain the label appeal of one ingredient, but lower the cost of the formula as a whole. This is extremely common when replacing exotic butters with shea butter or replacing part of a recipe's olive oil content to reduce costs.

Step 3: Change the Recipe With a Lye Calculator

No matter how you replace an oil in a soap recipe, you absolutely MUST recalculate the recipe using a lye calculator.

Every oil requires varying amounts of lye to fully saponify. You'll notice if you look at the lye amounts on each of the recipes above that they are slightly different! If you make a soap recipe that you have replaced an oil in and do not recalculate your lye amount, you may end up with lye heavy soap or a soupy mess that doesn't saponify all the way.

Did I lose you?

Don't worry! Learning the fatty acid profiles and understanding how they impact your soap recipe can take awhile!

If you aren't interested in diving into the chemistry of soapmaking and getting a handle on all of this, my previous article about creating the best soap recipe ever is probably a good starting point to help you replace an oil in a soap recipe!