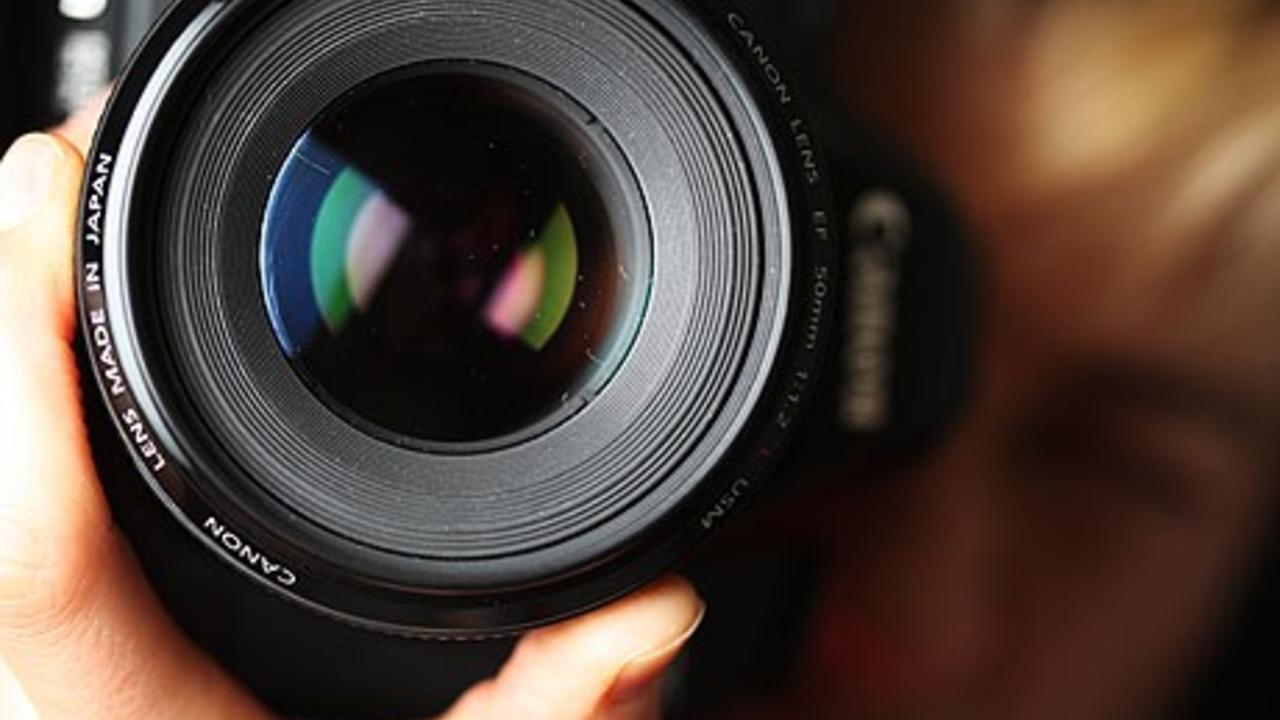 Are you ready to get in the know when it comes to photography terms? There's a lot of jargon that pops up when you are talking photography (kind of like soapmaking).  If you hire a pro photographer, it's easier to get what you want if you ask for it in their language. And, even if you opt to DIY photos for your biz, it will help to know some basic terminology! 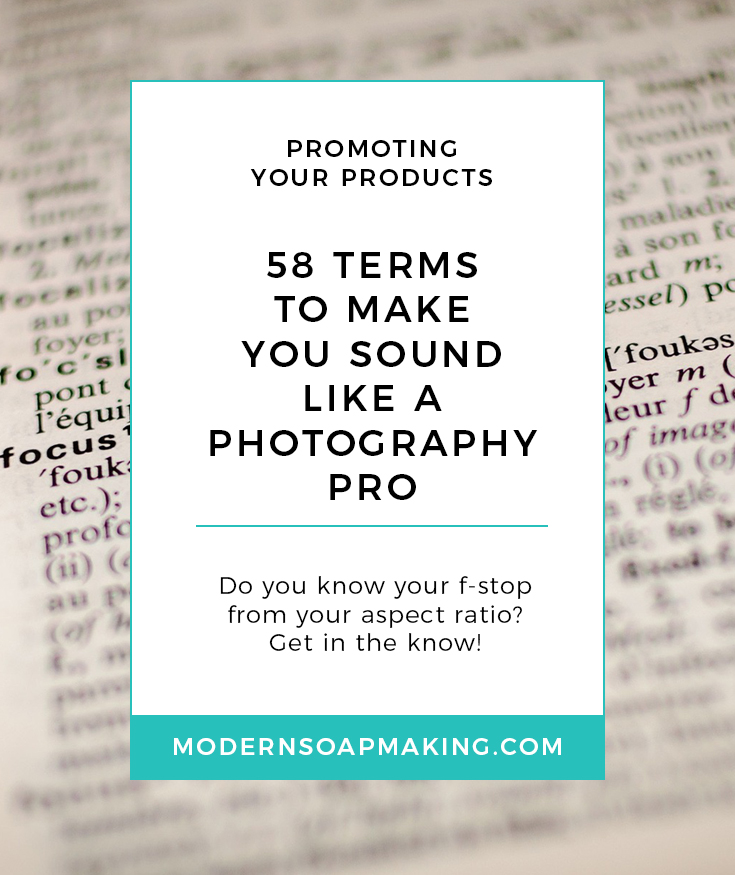 Ambient light – Ambient light is light that already exists in an indoor or outdoor setting. It's not supplied by the photographer. The sun shining during an outdoor shoot? That's ambient light.

Aperture – The aperture setting on a camera determines how much light the lens lets in. In addition, it also determines the depth of field (how much of the scene is in focus).

Automatic focus – When the lens on the camera focuses automatically once the shutter is pressed halfway, that's called automatic focus.

Backlighting – Light placed behind the subject, toward the camera lens, causes the subject stands out vividly against the background. Consequently, backlighting is great if you are going for a silhouette effect in your photography.

Barrel distortion – Notice lines that should be straight (like the sides of a bar of soap) are bowed in your photographs? Barrel distortion produces that bubbling appearance in the image. Probably not the kind of bubbles you are looking for!

Bounce lighting – You can (and should) use a reflector to bounce light off ceilings, walls, or subjects. It gives the effect of more natural or available light.

Bracketing – Photographers will sometimes take a series of photographs of the same subject at different exposures to ensure the “correct” exposure. Think of this as insurance when shooting in situations where a normal metering reading is difficult to obtain.

Color balance – Color balance matches the colors captured in your image to the original subject. When photos are your products' calling card, color accuracy is super important.

Color cast – Ever have a photo ruined with an unwanted tint caused by lighting or reflections? You experienced color cast.  You can usually correct this issue using editing software or the white balance settings on your camera.

Color space – Color space is the color profile and information that graphics programs and printers reference to accurately portray the image. Think of it as the spectrum or range of colors for the picture.

Composition – A pleasing arrangement of elements within a scene is called composition. (Taking a little time to set up your shoot in an appealing way will really pay off in sales!)

Contrast – Contrast is the range of difference in the light to dark areas of a print or image.

Cropping – When you frame a scene in your viewfinder or trim up the image in post processing (such as with Photoshop or similar programs), that's called cropping.

Depth of field – Depth of field is how much is in focus within an image or through the lens. It's determined largely by the aperture but may also be influenced by the distance between subject and lens. In photos where an item in the front is in sharp focus while items in the background are softly blurred, the photographer adjusted the depth of field to achieve that effect.

Diffuser –  A lens filter or other screen that softens available light is a diffuser. DIY options include white trash bags, tea towels or other sheer fabric, and tissue paper.

Dots per inch (DPI) – DPI measures the number of dots or pixels per inch and describes the resolution of a display screen or image.

F-stop – F-stop is just another name for aperture. Either is acceptable to use. (We had to throw one easy one in for you!)

Focal length – Focal length is the distance a lens appears to reach. The higher the number of the focal length, the further you can see.

Format – Format has two definitions you might hear in relation to photography. It refers to the size of your image (length and width). In addition, it is the function on your camera that wipes your memory card clean of info.

Grain – A pixelized, jagged, or noisy effect in images that becomes prominent at higher ISO ranges is called grain.

Grey card – Use an 18% grey card for setting white balance and color preferences.

Histogram – A histogram is a bar graph tool that identifies contrast and dynamic range of an image. You'll see histograms in advanced cameras and software programs.

Hotshoe – The place on top of a camera where you can attach a small flash is the hot shoe.

Highlights – The lightest tones of a picture are highlights. Highlights may contain some detail, but the strongest highlight will be completely white.

ISO – ISO refers to how sensitive film or a digital sensor is to light while photographing.

Liquid crystal display panel (LCD panel) – The electronic screen on the back of your digital camera where you view your pictures after (and sometimes before or while) you shoot is the LCD panel.

Lens shade/hood – Keep unwanted light from striking the lens and causing image flare by attaching a lens shade to your camera.

Lens speed – The smallest f-stop number you are able to set a lens at is its lens speed.

Overexposure – When too much light reaches the film or the digital sensor in a camera, it produces a very bright/light image. That's overexposure.

Pixelization – When the curves and angles of a  digital image have a jagged appearance, that is pixelization.

Point-and-shoot – This simple, easy-to-use camera style has minimal user controls and allows the user to just point and shoot.

Reflector – Any device used to reflect light onto a subject to improve the balance of exposure is a reflector. This is another piece of equipment you can totally DIY!

Resize – Reducing the size of your image is (duh!) resizing. (Increasing the size is a no-no because you lose quality.)

Retouching – When retouching, you alter an image to change the tones of highlights, shadows, and other details. You also clean up blemishes and other issues, if needed. People sometimes call this "airbrushing", even though the process has been digital for decades.

Self-timer – By utilizing the self-timer mechanism on your camera, you delay the opening of the shutter after pressing the release. Those extra seconds are a lifesaver if you need to model for your own shots.

Single Lens Reflex (SLR) – Any camera with interchangeable lenses is an SLR.

Soft lighting – Lighting that is low in contrast and soft in nature is soft lighting. Think of taking photos outdoors on an overcast day.

Stopping down – Changing the lens aperture to a smaller opening, from f/8 to f/11 for example, is stopping down.

Thumbnail – A small, low-resolution version of a larger image file is a thumbnail. Thumbnails allow for quick identification. And, they are used when making editing choices.

Tripod – A tripod supports your camera, holding it steady while you shoot. These three-legged supports are also available for your lights.

Underexposure – When too little light reaches the film or digital sensor of the camera, it causes underexposure. The resulting image, or areas of the image, are dark and lack detail.

Viewfinder – The viewfinder is the part of the camera you view and compose your image through before you take your shot.

Vignetting – You might recognize this one from your list of Instagram filters. Photographers sometimes underexpose image corners. Occasionally, they do this deliberately by shading. Often, they do it unintentionally due inappropriate to equipment, such as unsuitable lens hood or badly designed lens.

White balance – Finally, white balance refers to the adjustment of the brightness of the red, green and blue components of an image. The brightest object in the image appears white while eliminating any unwanted color cast.

Whew! So, do you feel like you just read the ENTIRE dictionary?

Talking to a pro, or tackling your own photography, can be a bit intimidating. But it's a bit less scary when armed with the right photography terms. And there is no need to memorize all that photo lingo. There won't be a quiz! But next time you hear a photo term and you aren't quite sure of the meaning, you will know where to look.

Ready to up your game when it comes to DIY photography? Purchase The Moneyshot, our product photography 101 class, from The Nova Studio. The class includes a 3-hour video and 6 digital Handouts: a shot tracker, a photography cheat sheet, a reference sheet, a vocabulary list, a resources list, *PLUS* a transcript of the video.

Dying to know what other photography words you came across mean? Then pop them in the comments!