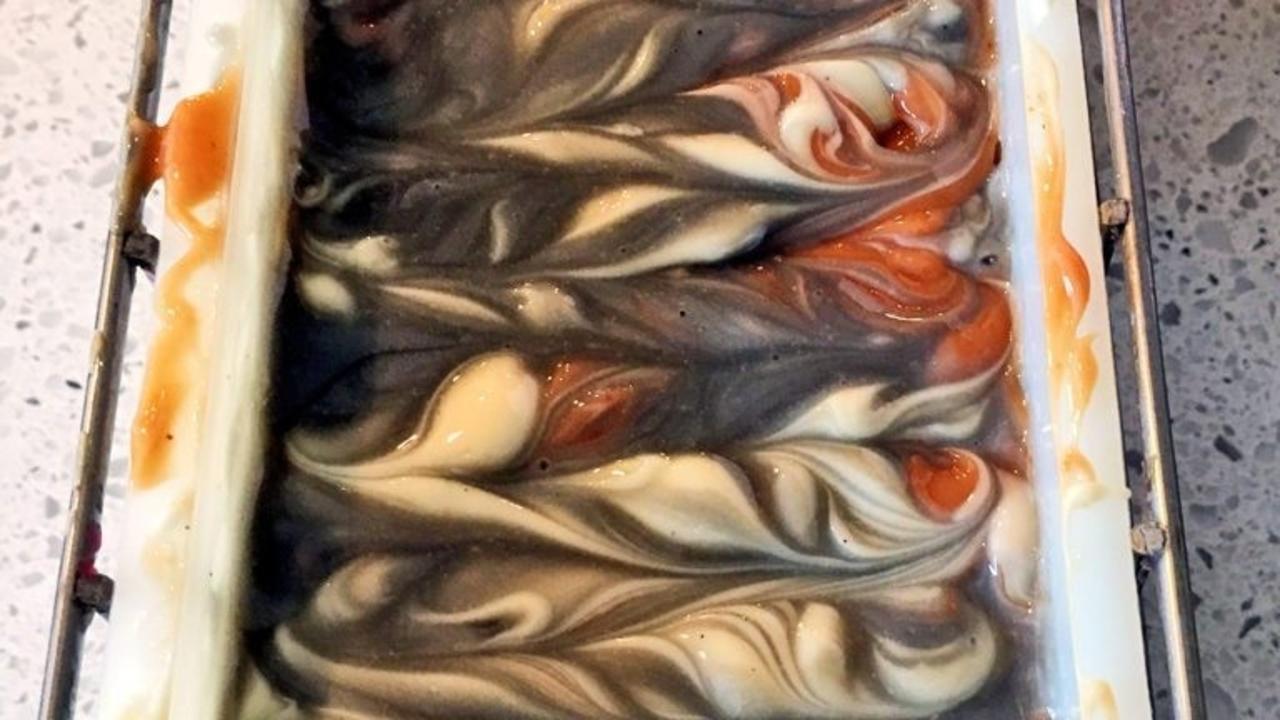 This tutorial comes to you courtesy of Leanna Blacher.

If you have been making soap for any amount of time, you have either heard of or used a fragrance oil called Black Raspberry Vanilla. This fragrance oil has become a favorite among soapmakers because it behaves well in soap. Plus, it it smells great and customers love it!!

So I started wondering what would happen if I used real black raspberries and real vanilla beans in my soap. I will admit that it did not work perfectly for me the first time (more on that later), but I learned from my mistakes and created a really wonderful soap on my second try.

Before we can use fresh ingredients in our soap, we need to prepare them! Here's what you'll need to make our two fresh homemade ingredients: pureed blackberries and vanilla bean infused cream.

PREP THE BLACKBERRIES: Simply place the blackberries into  your blender and blend at low speed until they are a jam-like consistency. Set aside until ready to use, or refrigerate if you will not be using it right away. 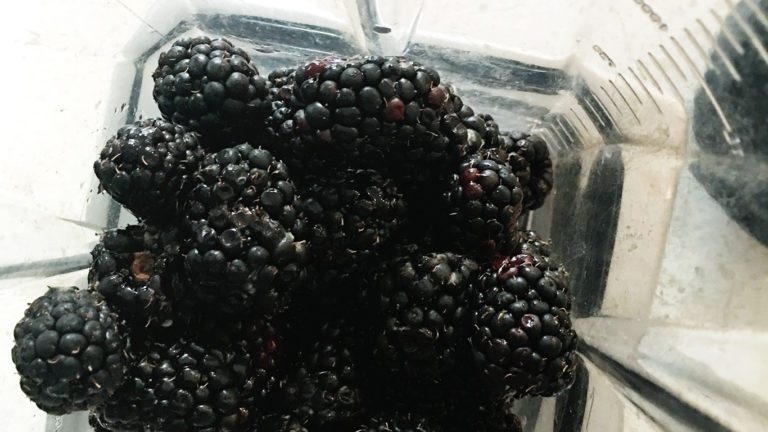 To prep the blackberries for the Black Raspberry Soap, pop them in a blender with no additional liquid. 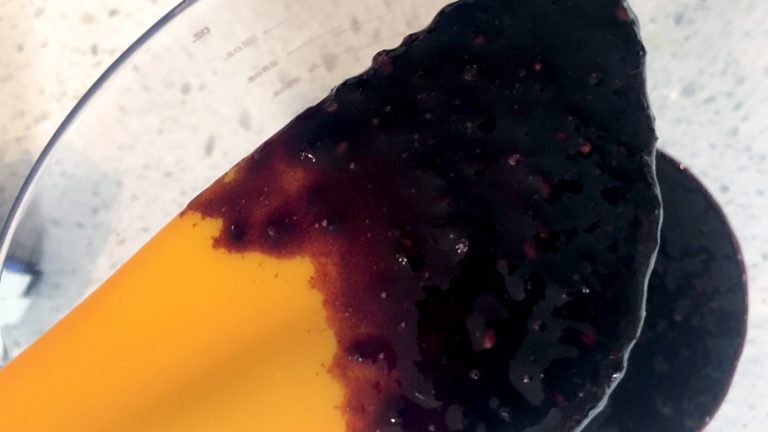 The puree should look like this when you are done blending. If you do not want seeds in your soap, you can strain them out at this point. I left them in mine.

PREP THE VANILLA: Place your vanilla beans flat on your cutting board. Using a paring knife, slice the bean lengthwise from one end to the other, leaving about 1/2" uncut at the end. 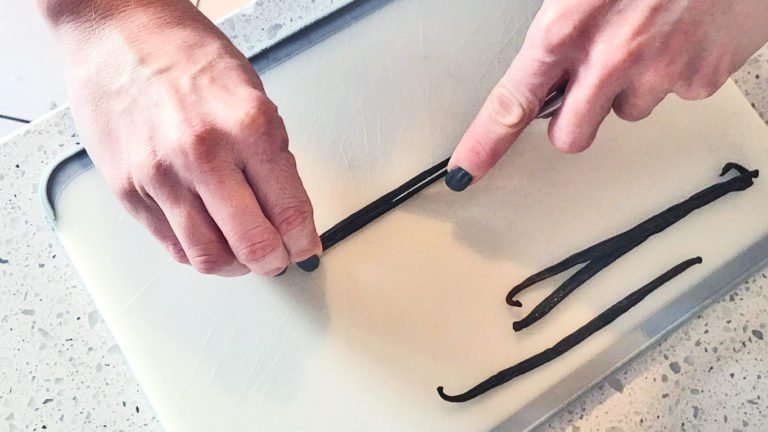 To prep the vanilla to make the vanilla infused cream, use the knife to slice the bean lengthwise, leaving a small amount at the end uncut. 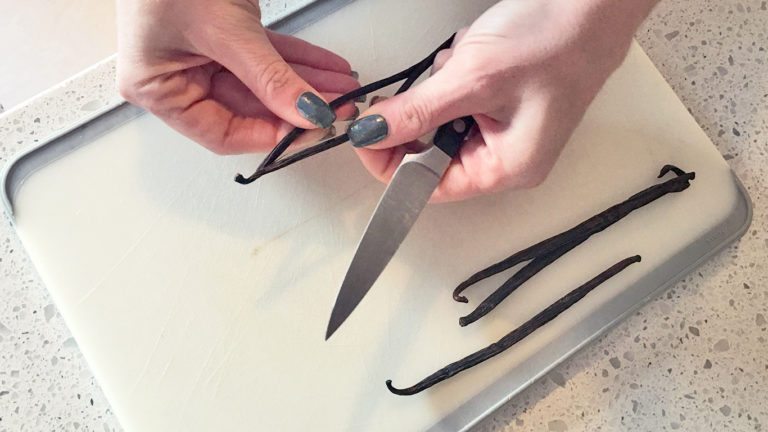 After cutting a vanilla bean, the bean should be a "V" shape.

Using the top of the knife (the side that isn't sharp), drag the knife along the inside cut edges of the bean, removing the small black seeds. Repeat for all four beans. 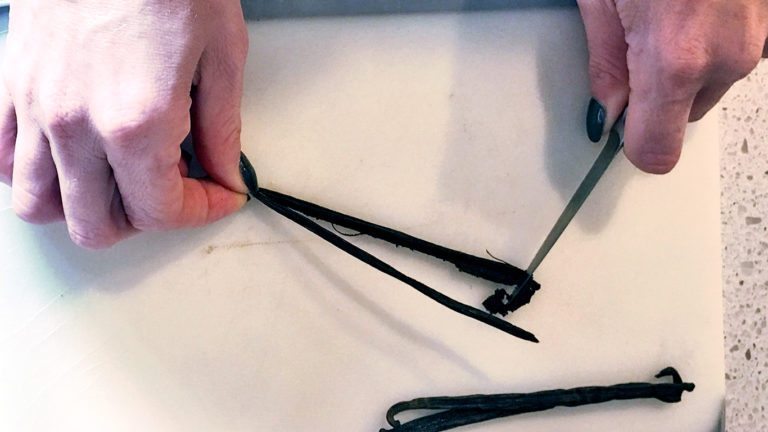 Scraping out the vanilla bean pod using the backside of the knife. 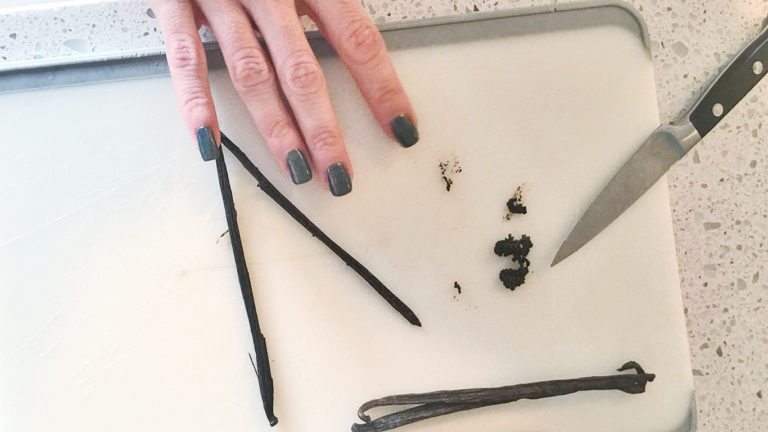 You can see the pile of vanilla seeds from only one bean!

INFUSE THE CREAM: Once the seeds have been removed, chop the beans into 3-4 large pieces each and place them, along with the seeds into your half and half or cream. You can certainly use any non-dairy type of milk here instead of the cream to make this a vegan recipe. 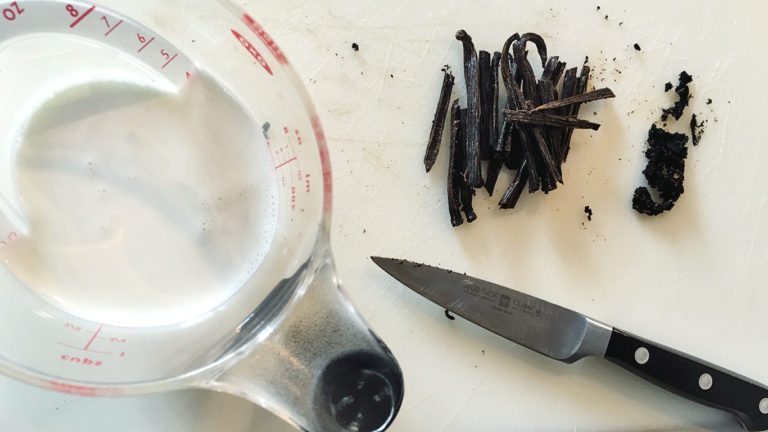 To make the vanilla-infused cream for the Black Raspberry Soap, roughly chop the vanilla bean pods before adding them to the cream with the vanilla seeds. 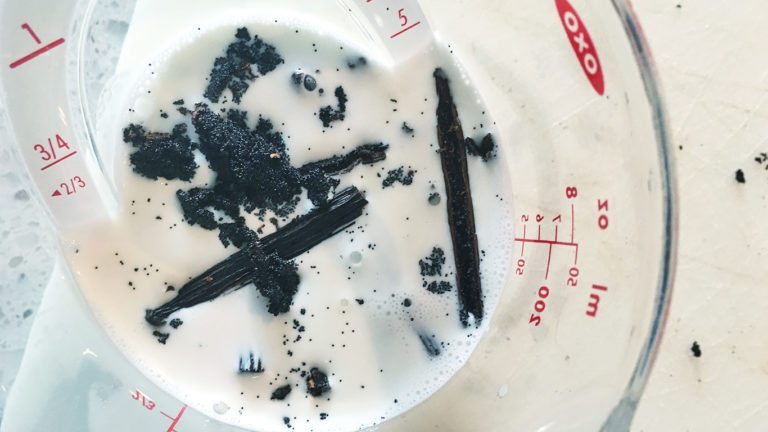 Add all of the seeds and bean pods to the cream. We will strain out the large pieces later. 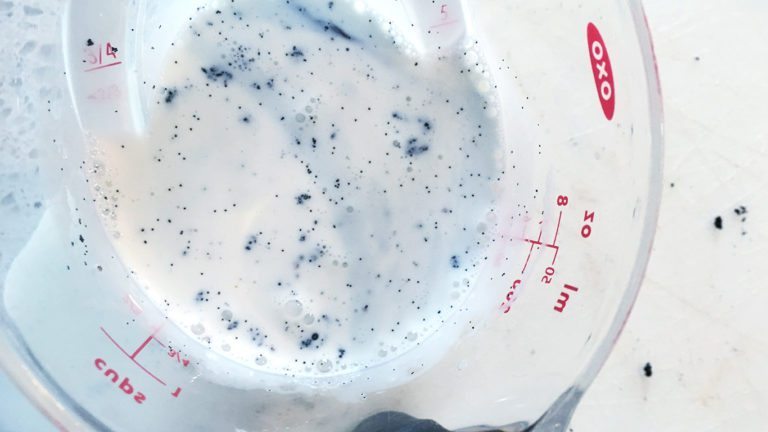 Allow the beans and cream to infuse for at least 20 minutes.

Allow the vanilla and cream to marinate for at least 20 minutes so that any seeds that are still attached to the bean pods will come out into the liquid. When you are ready to use the cream, strain out the large vanilla pieces so that you are only left with the small black specks in the cream.

This soap recipe is sized for a 11.25" Essential Depot silicone mold. You can resize it using a lye calculator for whichever mold works for you.

(If you aren’t sure how much soap your mold holds, you can find out with this guide to resizing your soap recipes to fit your mold.)

** I know that this is a steep water discount. I like to do this so that my soaps harden quickly and cure quickly. Please feel free to adjust this recipe for more water: a 33% solution would use 13.2 ounces of water total.

I buy most essential oils and fragrance oils from New Directions or Mad Oils. 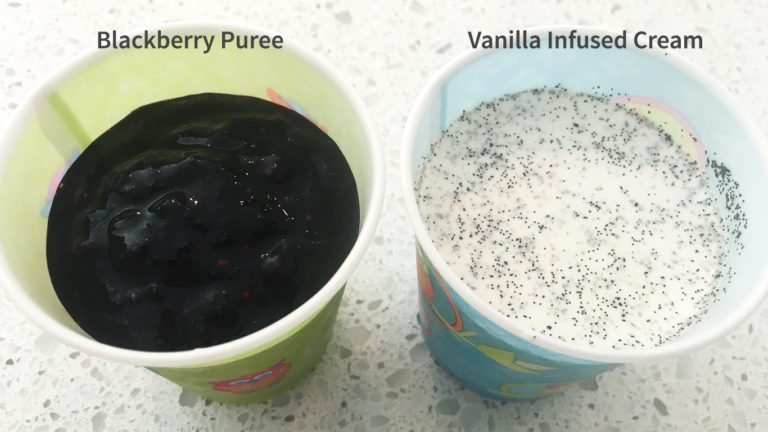 Vanilla-infused cream and blackberry puree are ready to go!

MAKE THE SOAP: Pour your lye solution into your premixed oils. I add my kaolin clay and sodium lactate to my oils and stick blended before adding my lye solution.

Divide your batter into three portions - approximately ¼ of the soap for the gray, then divide the remaining ¾ of soap evenly for the white and purple portions.

Add the purple mica and blackberry puree and stick blend until combined. This was when things got interesting! The soap turned a deep orange color. I just went with it and as it cured, it went back to a light purple. 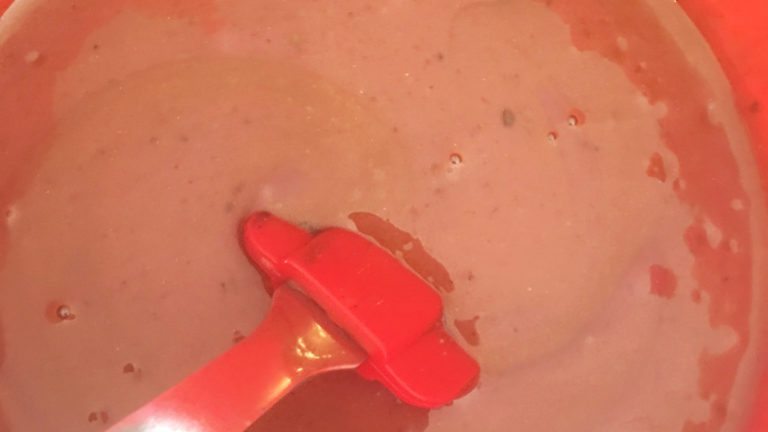 Add the purple mica and blackberry puree to the portion of the Black Raspberry Vanilla Soap, and stick blend until combined. It'll turn orange/red due to the berries!

Add the titanium dioxide and vanilla infused cream to the white portion and stick blend until combined. 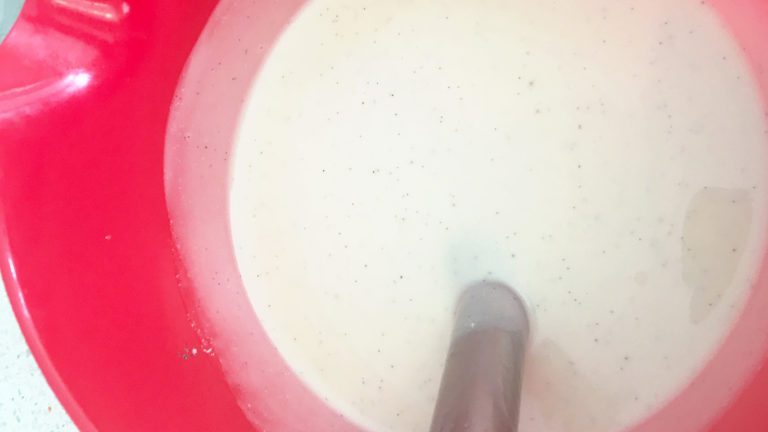 Add the vanilla-infused cream and titanium dioxide to a portion of the soap batter for the Black Raspberry Vanilla Soap. You can see all of the little black specks!

Add the gray mica to the smallest portion and stick blend until combined.

SWIRL IT UP: Once all of your colors are ready, pour one at a time into the mold, using half of the purple and half of the white each time, with the entire gray portion between them. Save a few tablespoons of each to decorate the top by randomly placing the three colors all over. 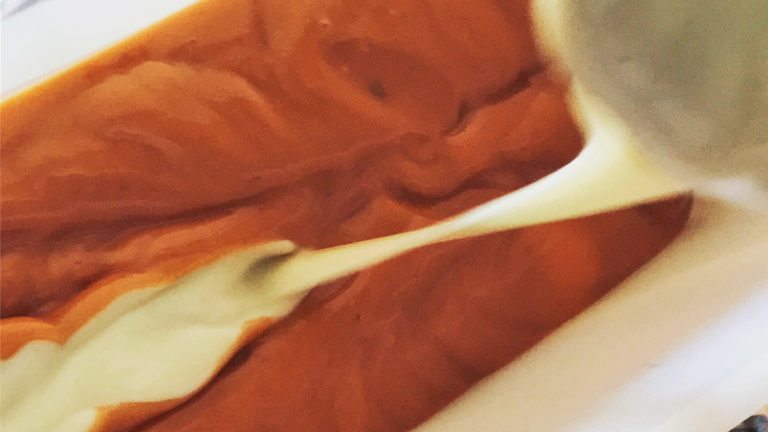 Drop swirling the white into the "purple" portion. 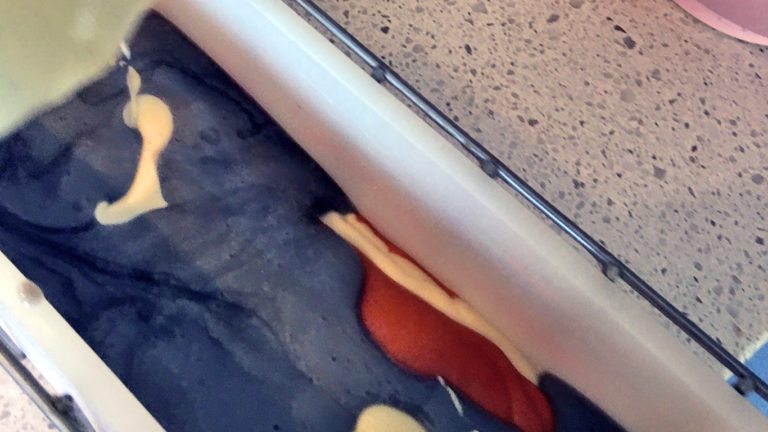 All of the gray soap is poured over the purple and white layers. Repeat until all of the soap is used, except a little to decorate the top. 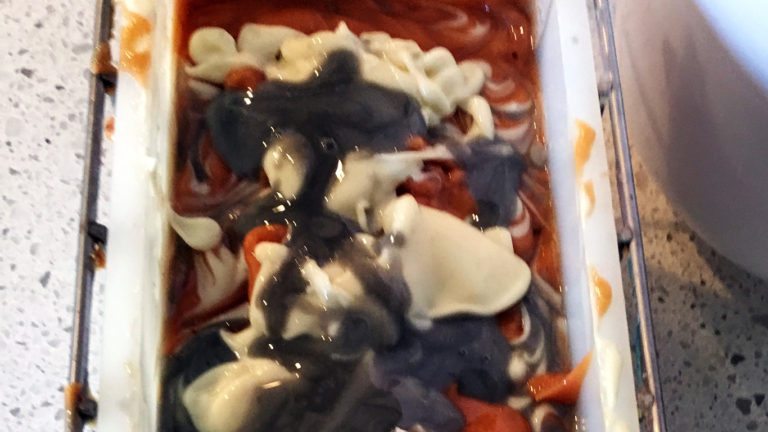 The remaining colors are randomly placed on the top of the soap, ready to be swirled.

Use a small wooden skewer to swirl the soap in a loose linear pattern. 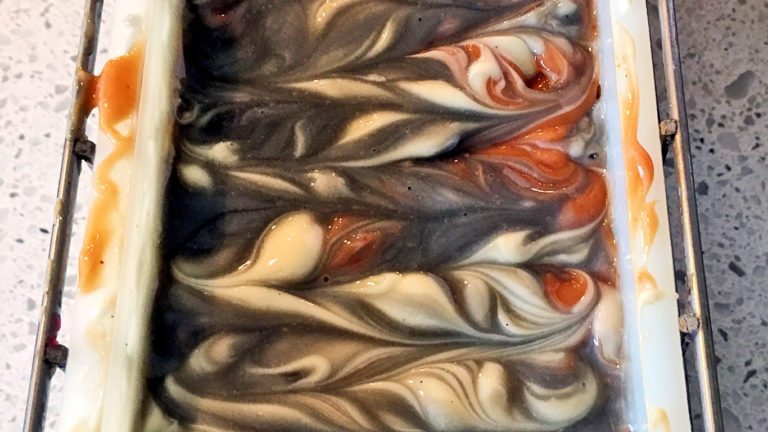 Swirl the top of the Black Raspberry Vanilla soap with a chopstick or skewer.

Cover your mold with plastic wrap and wrap it in a blanket overnight to fully gel. Cut, cure, and enjoy! 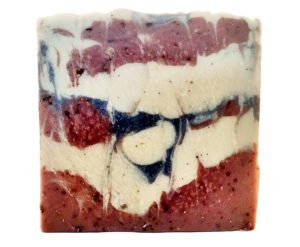 A note about my trial and error: A good rule of thumb for using purees is a maximum of 1 ounce of puree/extra liquid per pound of oils. You can also discount your water to account for this, as I did.

The first time I made this soap, however, I thought I could get away with using 4 ounces each of the blackberry puree and the cream, even though I should have maxed out at 3 ounces. The soap worked, but had some issues.

The white portion got very intense glycerin rivers from an excessive amount of liquid and the purple portion was not as firm as it should be. I use a big water discount partially so I don't have to worry about using extra liquids, but this time, I went too far!!

I also decided to make the purple a lot lighter in my final batch so you can better see the blackberry seeds in the puree. I hope you can learn from my mistakes! 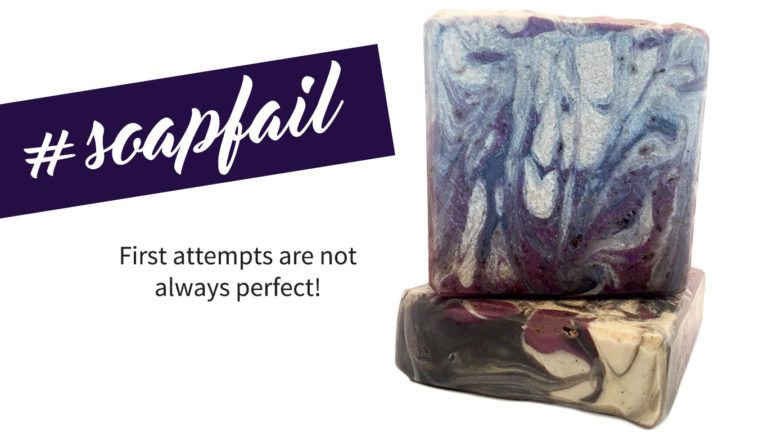 This was my first try at making this Black Raspberry Vanilla soap! The glycerin rivers made the white layer look curdled!

Even chefs have bad days in the kitchen.  At least my family will have some soap to use for the next month or two!!

The black raspberry vanilla soap recipe featured in this tutorial is palm free, and can easily be a vegan recipe by replacing the cream for a nut milk or rice milk. It uses a 10% superfat and a 40% lye solution. Feel free to adjust as necessary!

I learned a lot making this tutorial. I love playing around with fresh ingredients and I would love to hear what you have tried or would like to try. Or even some of your fresh food failures! Let me know in the comments below if there is a food item or liquid you'd like to see in my next Using Food in Soap tutorial!